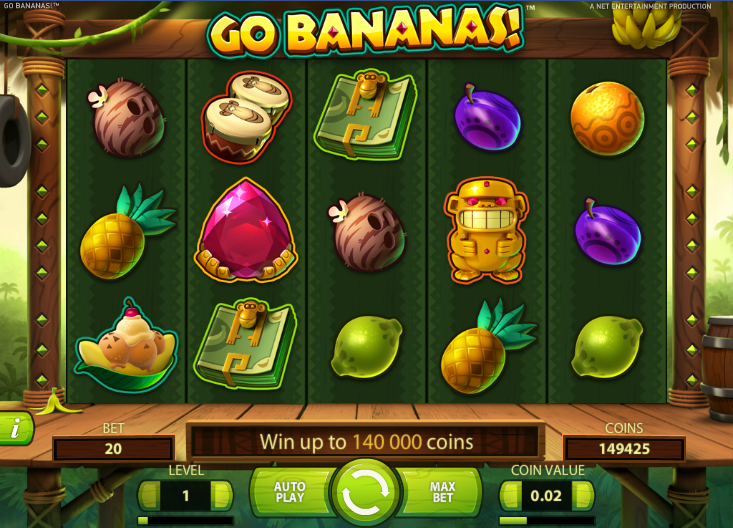 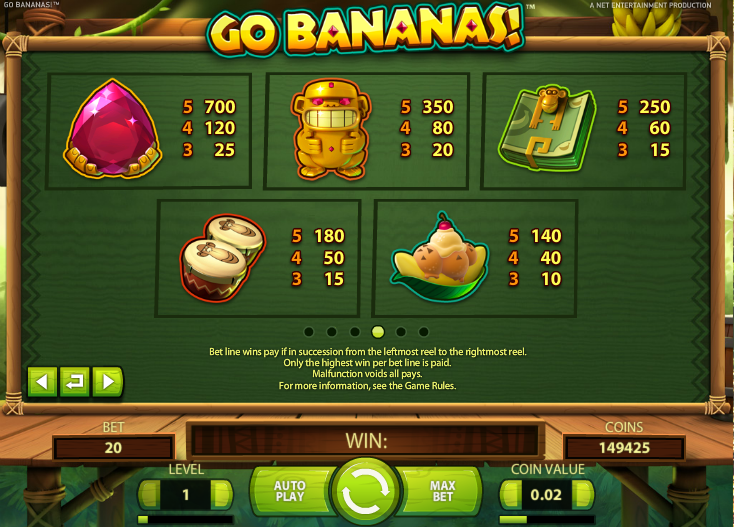 We’ve been waiting for the release of Go Bananas! for a little while but that’s Ok because we’ve got plenty of other online slots to keep us busy. It’s here now though and and so it’s time to take a detailed look at this Net Entertainment release. As you can tell by the title it’s monkey and fruit related and there’s nothing wrong with that.

Go Bananas! is a five reel slot with twenty fixed paylines and those reels are set inside a wooden frame which is mounted on some sort of stage in the jungle.

The symbols are all nicely designed and there are ten main ones which include plums, limes, coconuts, pineapples, oranges,, a banana split, bongo drums, a monkey money clip, a gold statue and a pink gem.

The wild symbol is represented by five different animal characters and we shall explain more below.

In common with many other Net Ent games, Go Bananas! does not have a separate bonus feature. Instead, funky things happen in the main game and these are triggered by various animal bonus symbols.

All you need is to land one or more of the special animal symbols anywhere on the reels and a this will trigger a pre-determined pattern of symbols to turn wild, relative to where the symbols lands on the reels. The animals and patterns are as follows:

It is of course possible to land more than one animal on the reels in a single spin and when you do this, big wins may well be the order of the day. Check out the video above for some gameplay.

The paylines are fixed so there’s nothing very much we can offer here. We would just advise keeping the sound on and setting up the Autoplay for the best slots experience.

We make no secret of liking most Net Ent slots and we like this one as well. It looks and sounds good and if nothing else it’s worth checking out the big gorilla who stomps onto the reels when his symbols lands.