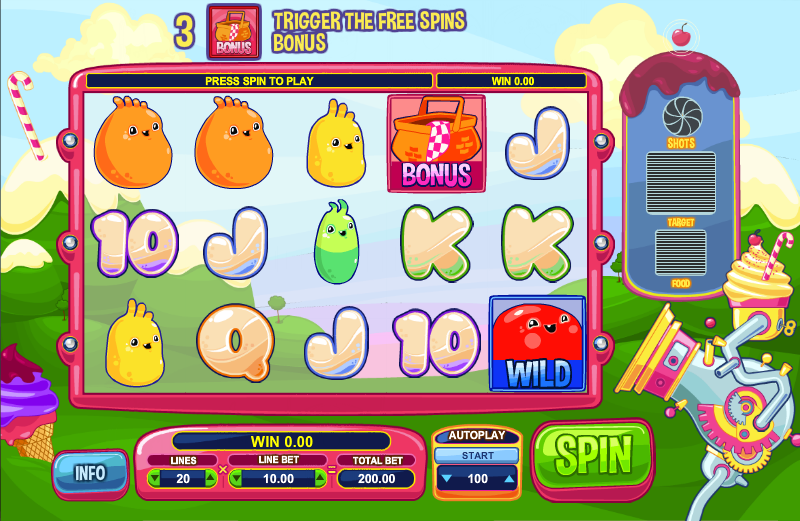 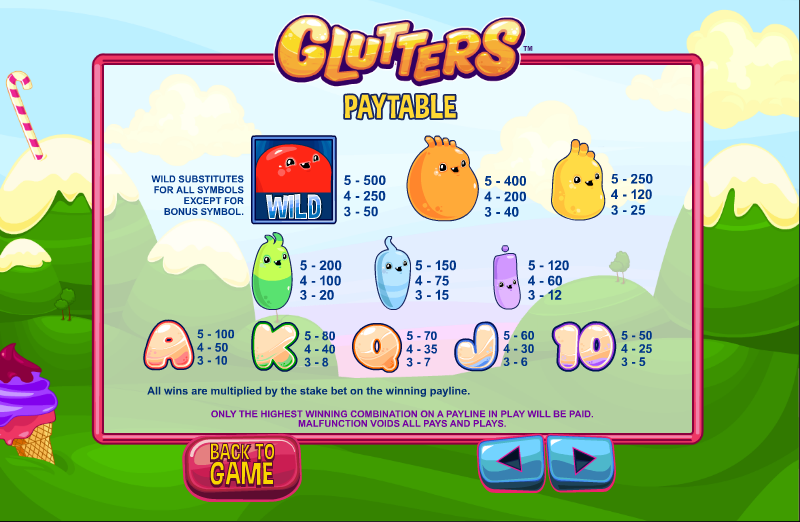 You may not be familiar with the word ‘Glutter’ and you won’t find it in any dictionary but for the purposes of this online slot it refers to the creatures that inhabit this particular world and in particular their appetite for food. It’s developed by Leander Games (now part of Amaya Gaming) and it’s a colourful jaunt with some clever bonus features – read all about it below.

Glutters is a five reel slot with three rows and up to twenty paylines; it all takes place in some sort of food-themed land with ice-creams and cream-topped hills providing the backdrop.

The high value symbols are the Glutters and there are five – purple, blue, green, yellow and orange; 10, J, Q, K and A make up the lower values.

A big red Glutter is the wild symbol and it substitutes for all others except the bonus – that’s represented by a picnic basket.

This is the contraption to the right of the reels and it’s activated randomly in the base game and the free spins. If activates it will spin and result in the following:

For example one shot at a green Glutter with a cupcake will increase the value of that symbol by two so it turns into an orange Glutter. The best result is for a Glutter to become a wild symbol.

When the food chucking is over the reels will be re-evaluated with the new, more valuable symbols on show.

This is triggered by landing three of the picnic basket bonus symbols anywhere on reels two, three and four; you start with five free spins but as you can see from the video above you must first fire food at the five Glutters to earn more spins.

Just click on each Glutter in turn to feed it to grab more spins; if you are unlucky and fire a bomb at one it will explode and give you no more spins.

The free spins round will then start and during this round the Food Cannon will appear more regularly.

Glutters is a charming slot with lots going for it including some engagingly cute graphics, funky sound effects and the Food Cannon feature which is something of an innovation. It’s certainly worth checking out.