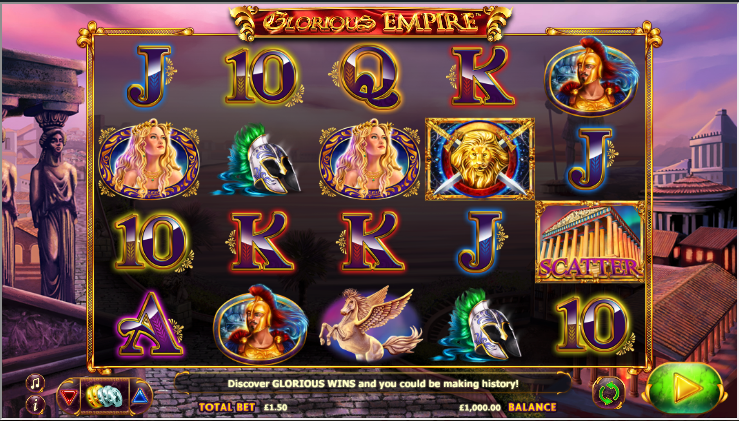 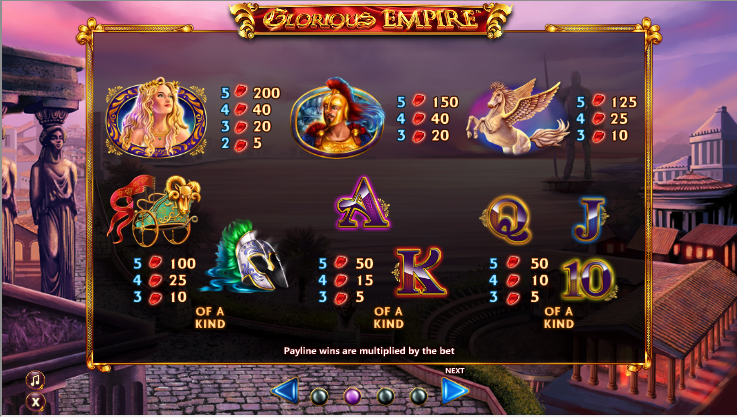 Many empires across the ages will claim to have been ‘glorious’ with varying levels of justification and one of those is the reign of the Ancient Greeks; this online slot from NextGen Gaming is themed on that civilisation, it’s called Glorious Empire and you can find out all about it here.

Glorious Empire is a five reel slot with four rows and forty fixed paylines; those gold-rimmed reels sit against a backdrop featuring the city of Athens with ornate buildings under a sunset sky.

There are several theme-related symbols and these include male and female characters, Pegasus, a decorated chariot and a helmet; 10, J, Q, K and A represent the lower values. Wins can be formed from right to left as well as from left to right.

The wild symbol is the lion/swords symbols and is will replace all others in a winning payline except for the Parthenon scatter icon which is the key to the main feature. The wild is also the highest payer, earning 4000x the line bet for five on an active payline.

This is triggered by landing three or more of the Parthenon scatter symbols anywhere in view for which you will receive the following:

During this round any wild symbols landing will freeze in place for the duration of the spins. Landing at least three more Parthenons will trigger more free spins.

Any win can be gambled by clicking the hearts/clubs button below the reels; try to double or quadruple that sum by guessing correctly the next colour or suit.

Glorious Empire is a worthy addition to the ranks of Greek god-themed slots and it’s worth checking out, especially if you’re a fan of this theme. You’ll win small amounts on almost every spin and it comes with an RTP of 96.93%