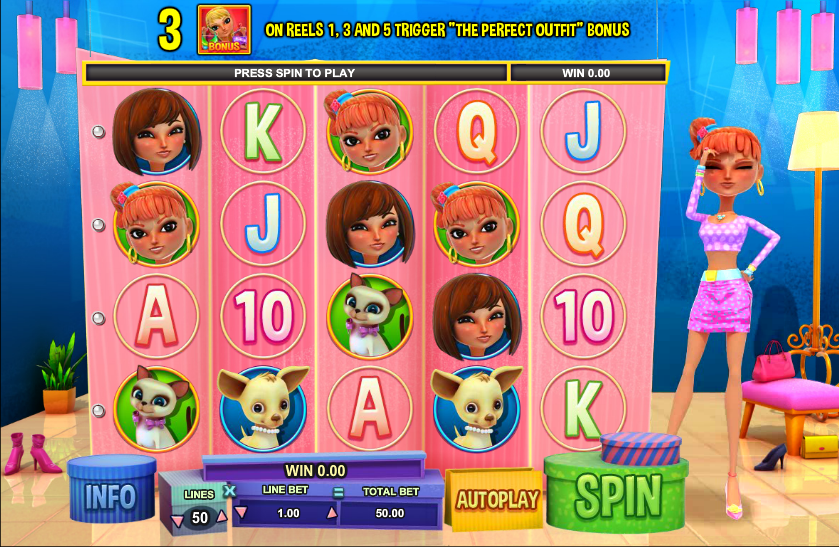 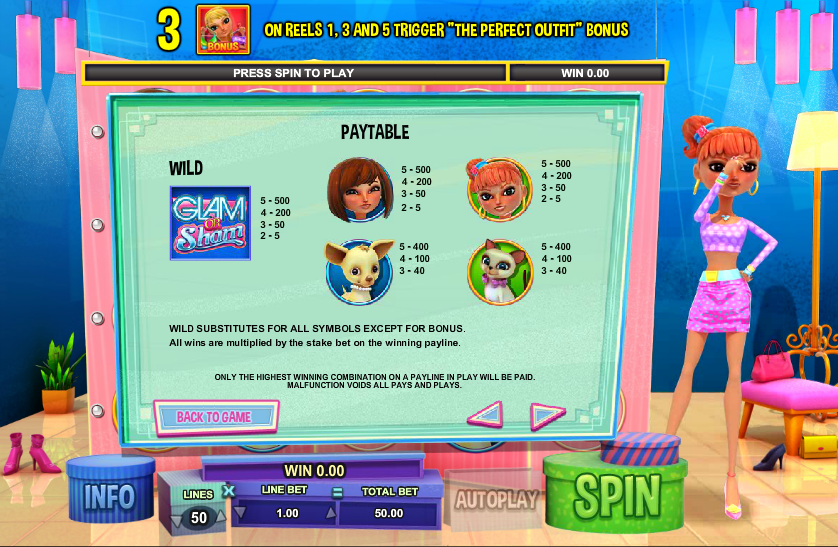 There’s a clash of styles on show here as two girls with differing fashion tastes face off on the reels in this colourful online slot from Leander Games (now part of Amaya Gaming). It’s called Glam Or Sham and and in some ways it tells the story of the first world problems facing a young girl preparing for a night out. It also has two bonus features and it’s all described in more detail below.

Glam Or Sham is a five reel slot with four rows and up to fifty paylines; it’s very pink and pastel which suits the theme and our ‘heroine’ stands to the right of the reels, watching over proceedings.

The four high value symbols are the girl, her brown-haired friend, a pampered dog and a spoiled cat; lower values are 9, 10, J, Q, K and A.

The Glam Or Sham logo is wild and substituted for all others except the two bonus symbols – the ‘Versus’ Free Spins and the ‘Perfect Outfit’.

Trigger this feature by landing three of the Free Spins symbols anywhere on reels two, three and four; you will initially be awarded ten free spins and one of the two girls’ styles will be assigned to you.

Symbols representing the two styles appear on the reels during this round and you need yours to total more than the other by the end of the round. Manage this and you’ll get an extra five free spins – this can be won indefinitely.

This is triggered by landing three of the Perfect Outfit bonus symbols anywhere on reels one, three and five. You will now be shown a screen displaying fourteen dressing room doors and you must find two matching outfits. The more attempts, the higher the multiplier value of your total stake.

Despite our scorn about the theme we’ve enjoyed playing Glam Or Sham and have been quite successful triggering the bonus features. It’s good fun and comes with an RTP of 94.90%.