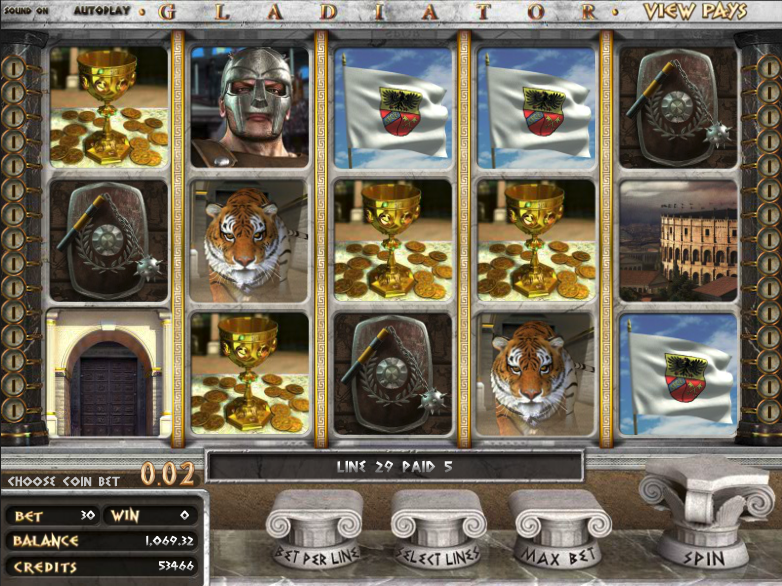 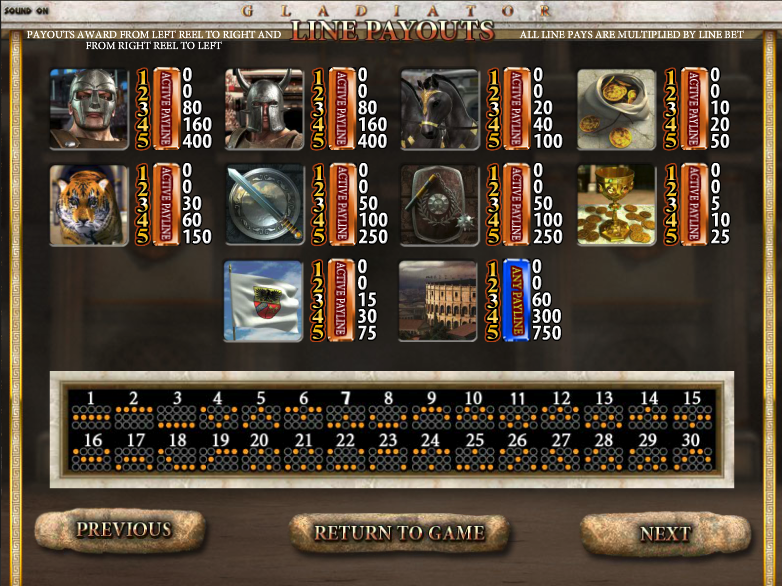 Ancient Rome is the venue for many an online slot and while most are based around the various gods and goddesses which bestowed favour on this once great empire, a few are themed on the gladiatorial combat which entertained these enlightened citizens. Gladiator is the name of this one, it’s from Betsoft and it includes a number of entertaining bonus features.

Gladiator is a five reel slot with three rows and up to thirty paylines; dark marble columns frame the reels which are separated by ornate gold-trimmed strips.

The main symbols are all related to the theme and include a black horse, a bag of gold coins, a tiger, a shield/spear, a shield/mace, a gold chalice, a flag and a view of the Colosseum.

The princess is an enhanced wild symbol and there are several bonus icons – the hero and villain gladiators, the large door and the Colosseum – which contribute to the extra features. The Colosseum is the scatter symbol.

The princess acts as a standard wild symbol unless she appears on the top row of any reel in which case she’ll sprinkle petals on to the positions below, turning them wild also. There are no guaranteed wins here but there’s a 2x multiplier for any prizes.

Landing the hero gladiator anywhere on reel three will trigger this feature and you will see a marble slab cover the centre reel. The gladiator will then appear to smash it up and reveal an expanded wild which covers that whole reel.

Land three or more of the wooden door symbols anywhere in view to trigger this mini-game and all you have to do is click one of the symbols to reveal a prize. You can keep clicking and collecting prizes until the ‘Collect’ message appears to spoil your fun.

This is triggered by landing the hero gladiator, the Colosseum and the villain gladiator adjacent to each other on reels one, two and three or reels two, three and four.

You must now choose the hero or villain as a winner and watch them battle it out briefly in a fight to the death. You’ll get a prize whoever wins but it will be greater if it’s your man.

Like similar Betsoft slots, Gladiator offers lots of easily triggered bonus features which we always regard as a good thing. The graphics, animations and sounds are of a high quality and this is certainly a game to recommend.