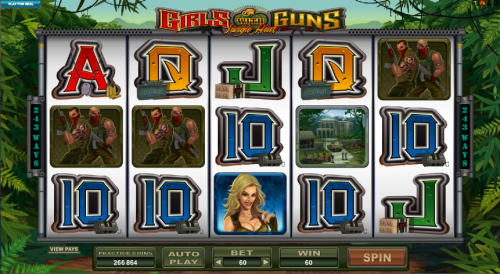 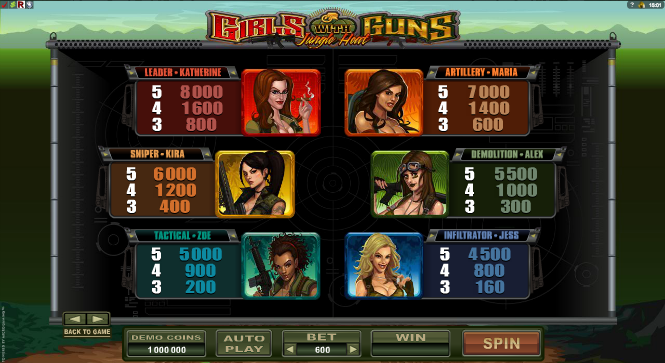 Set in some sort of Central American location, Girls With Guns looks like it owes a small debt to Charlie’s Angels, the classic 70’s television show which featured three ladies solving a variety of crimes in and around Los Angeles.

In Microgaming‘s new slot there are six girls and the action is more hardcore but we think there’s some similarity.  Girls With Guns is subtitled Jungle Heat and it’s set in a steamy jungle location which requires plenty of skimpy outfits to complement the big guns.

The graphics are fantastic, look closely at the foliage behind the reels and you’ll see them swaying in the breeze; each character has a movie associated with them which displays their individual skill.

There are five reels and 243 paylines; playing card symbols represent lower values while the girls – Jess (infiltrator), Zoe (tactical), Alex (demolition), Kira (sniper), Maria (artillery) and Katherine (leader) – make up some of the high value symbols. Other symbols include a well-guarded house, some guards and a drug lord.  The wild symbol is the Girls With Guns logo, there’s a special wild for the third reel and the scatter is a heart-shaped hand grenade.

This bonus game can be triggered by landing three or more of the grenade scatter symbols and for that you’ll receive 15 free spins.  The good bit is that on each spin, one of the reels turns into an expanding wild featuring a short clip of the girl in question brandishing her weapon.

Even better news is that the spins can be re-triggered by landing three more scatter symbols during the bonus round.

The Girls With Guns wild is stacked on all reels which means it can cover all or part of the symbols on one reel, offering more chances to create winning combos.

The special wild is a silhouette of the girls which only appears on reel three in normal gameplay; if it does it expands to make all symbols on that reel wild.

There are so many ways to win in this online slot machine because it dispenses with paylines and winning combos can be created as long the symbols are in adjacent reels.

There’s very little not to like about this slot; some great graphics, an easy to trigger bonus feature and some dramatic background music and sound effects make it a top-notch gaming experience.