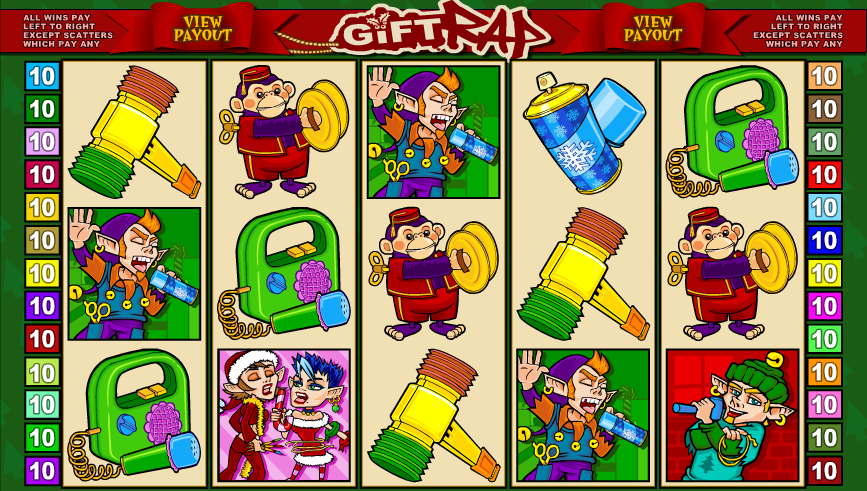 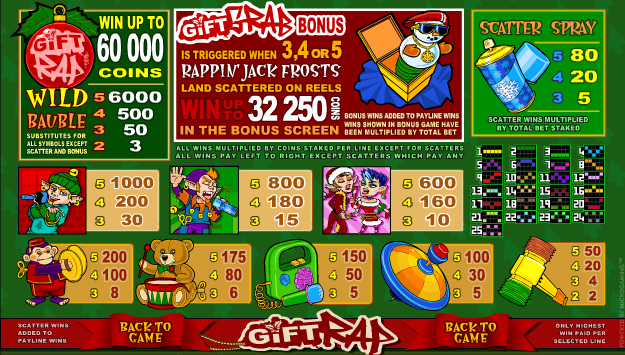 Games developers love a good pun as much as anyone else and Gift Rap is another good example of the practice. It’s an online slot from Microgaming with a Christmas theme but the double meaning of the title also introduces us to a number of cartoon rappers, doing their stuff on the microphone.

Gift Rap is a fast-moving and colourful game with five reels and twenty five paylines; the subject matter is one of children’s Christmas presents interspersed with several elves indulging in some rapper’s delight.

Those symbols include a squeaky hammer toy, a spinning top, a child’s microphone and speaker, a teddy bear with a drum and a wind-up monkey playing the cymbals. There’s also a duo of female rappers and then two single elves which are the most valuable symbols.

Bonus symbols include a Gift Rap bauble wild, a snow spray can scatter and a Jack In The Box scatter which activates the main feature.

Those Jack In The Boxes are actually sunglass-wearing snowmen called Rappin’ Jack Frosts who come complete with a slight hint of Run DMC and you need to land three, four or five of them anywhere on the reels to kick off this feature.

It’s actually a pretty brief game and you will be taken to a screen displaying a number of gifts. All you need to do is keep picking the presents for coin rewards until you find the one with Rappin’ Jack Frost inside. The game is then over and you can collect your total prize.

If all you want to do is trigger the feature then you can get away with playing just one payline as it will be triggered by the scatter symbol. Prizes will of course be proportionately less though.

This is brisk and colourful slot which is let down a bit by an unexciting bonus feature – even a few free spins would probably have been preferable. Maybe worth a quick visit.