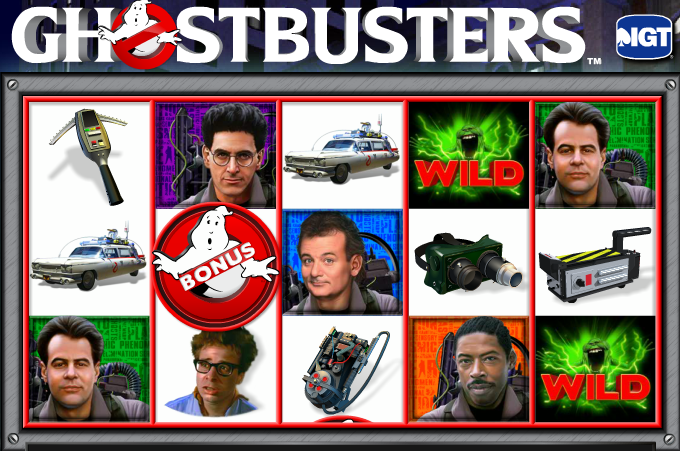 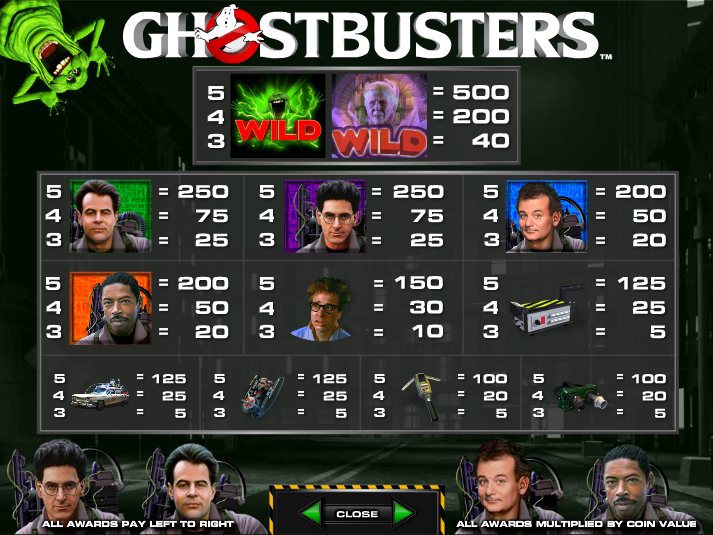 Online slot developer IGT usually know how to produce an entertaining and addictive gaming experience and Ghostbusters is no exception; it’s brand new for 2013 and anyone over the age of about 35 will appreciate this homage to the 1984 feature filming starring Dan Aykroyd, Sigorney Weaver and Bill Murray among others.

The first thing that hits you when you load up this game is the music – as far as we can tell the original soundtrack has been used as the theme and that instantly recreates that fantastic Ghostbusters atmosphere.

This slot features five reels and thirty paylines and the five male leads in the movie represent the more valuable symbols.  Other symbols are the ghost trap, the converted ambulance that serves as their vehicle, the proton pack, the P.K.E. meter and the ecto goggles.

Special symbols are as follows:

Two ghost bonus symbols and a slimer bonus will trigger this game and you’ll get five proton shots to uncover ghosts hiding in the aforementioned ballroom.  Each revealed ghost is worth a cash prize and if you’re lucky a multiplier of up to 5x will be applied.

Two ghost bonus symbols and a Stay Puft bonus will activate this feature and you’ll get eight free spins on forty paylines rather than the standard thirty. The reels are altered during the spins with a range of Stay Puft-related items and after each spin there’s a chance that a flying marshmallow will turn one or more reel positions wild for the duration.

In this round the wilds are changed into a toasting marshmallow and a the Stay Puft character.