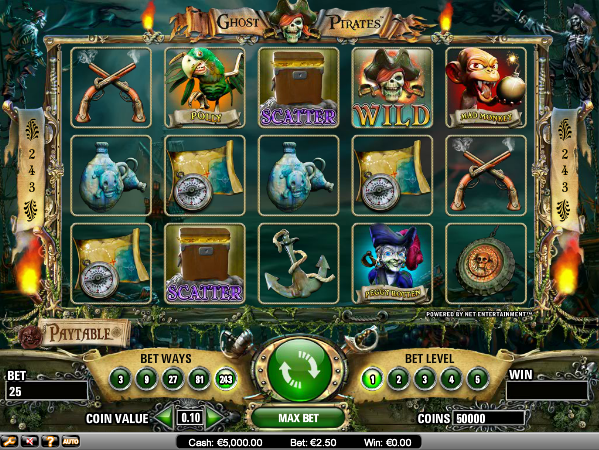 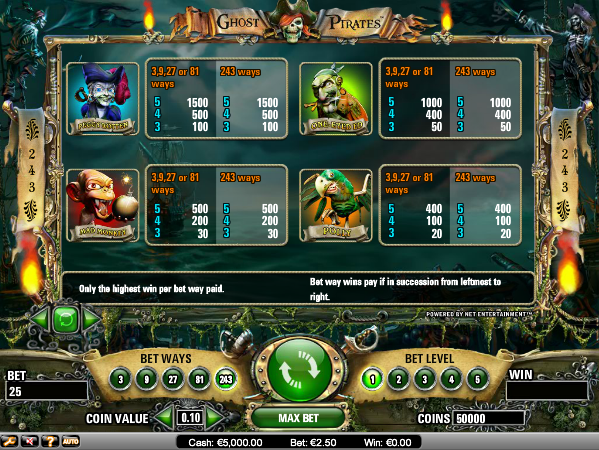 Everyone likes ghosts and everyone likes pirates so what better to base an online slots theme on than a combination of the two and that’s what Net Entertainment have done with Ghost Pirates.  Perhaps it owes a little something to the Pirates of the Caribbean series of movies but there’s nothing wrong with that.

Ghost Pirates is a five reel and 243 payline slot with the option to play on 3, 9, 27 or 81 lines depending on your preference.  There are no playing cards here and all the symbols are represented by ghostly, piratey items.  We have an anchor, a cannon, a vase adorned with a skull and crossbones, a map and compass, a seal and crossed pistols.  Characters include Polly the Parrot, Mad Monkey, One-Eyed Ed and Peggy Rotten.

Special symbols are a skull wild symbol and a treasure chest scatter and the reels are set against a ghostly, decaying ship.

We mentioned above that it’s possible to select between 3, 9, 27, 81 or 243 paylines and it’s worth noting that selecting 243 will grant you bigger payouts on certain combinations in standard play and it will also reward you with more free spins should trigger the bonus round.

There’s lots of free spins available in the bonus game and you trigger it by landing three, four or five of the treasure chest scatter symbols on the reels.  The symbols must start on reel one and then appear on adjacent reels to activate the bonus feature.

As always with Net Entertainment slots the first thing you notice is the quality of the graphics and animations and that’s the case here; each symbols is beautifully drawn and where they animate (the wild symbol for example) it looks fantastic.

These features are complemented by a ghostly soundtrack and the whole effect creates a game you’ll want to return to.