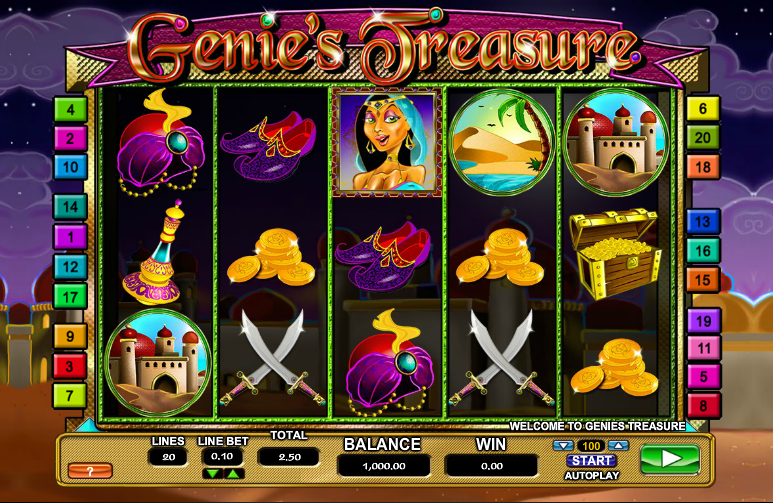 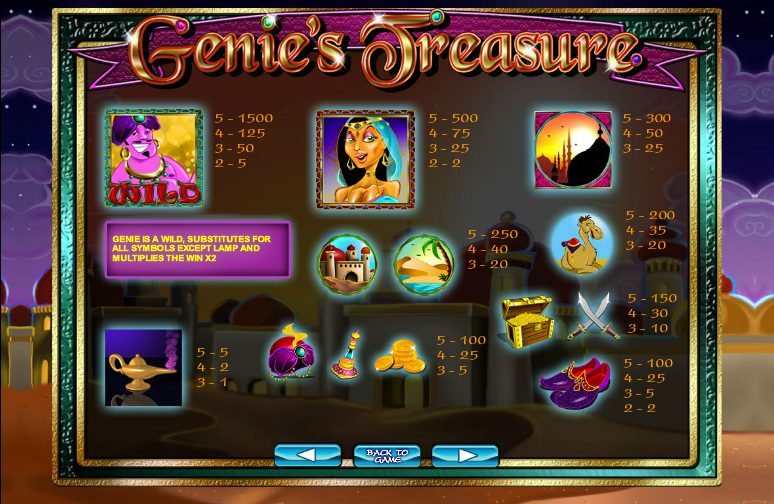 The old tales of the Middle East have provided plenty of inspiration for online slots developers over the years and one of the central characters is often the genie who will appear whenever his lamp is given a swift polish. Genie’s Treasure is another game which uses this theme, it’s developed by 2By2 Gaming and it comes with several bonus features.

Genie’s Treasure is a five reel slot with three rows and twenty fixed paylines; those reels have slightly basic design but there’s a nice desert scene in the background and some geographically appropriately music to accompany your spins.

All the symbols are related to the theme and include the princess, a sunset, a castle, an oasis, a relaxing camel, the Genie’s turban, a beaker, some gold coins, a treasure chest, some crossed swords and a pair of pointy shoes.

The Genie himself is wild and will replace all others in a winning combination except the lamp scatter icon; he will also multiply any win to which he contributes by 2x.

Some symbols may display a small gold coin when they land and if you see three at the same time the Genie will appears to offer you three choices – pick one to reveal a cash prize.

4 Of A Kind Respin

If you can land a four-of-a-kind combo (wilds also count) then those reels will be held in place and the remaining reel will respin to offer a chance of five of a kid.

This is triggered by landing three or more of the lamp scatter symbols anywhere in view and you will initially receive five free spins with a 2x multiplier for all wins. Now pick the lamps to reveal more free spins after which this round will begin.

Genie’s Treasure is an action packed slot in which the features seem to be constantly triggered giving lots of relatively small wins; it has some nice graphics and sound effects and an RTP of 94.99%.