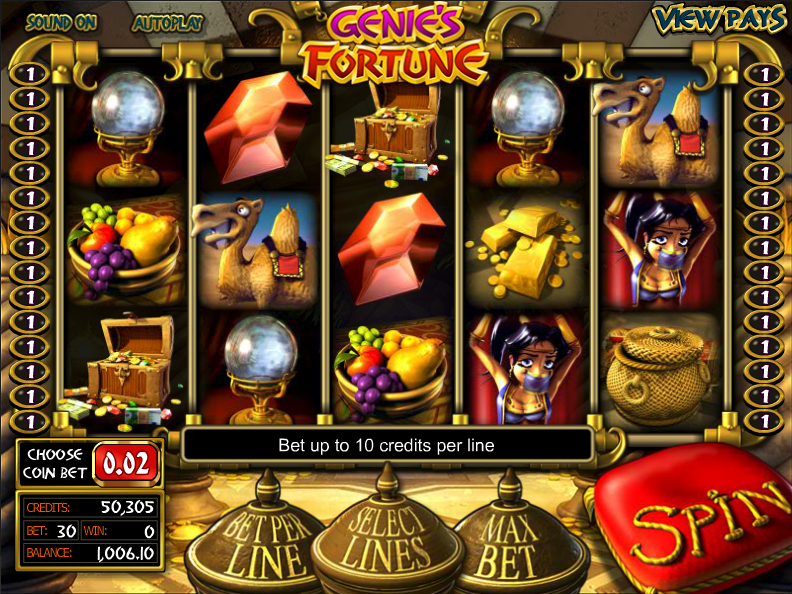 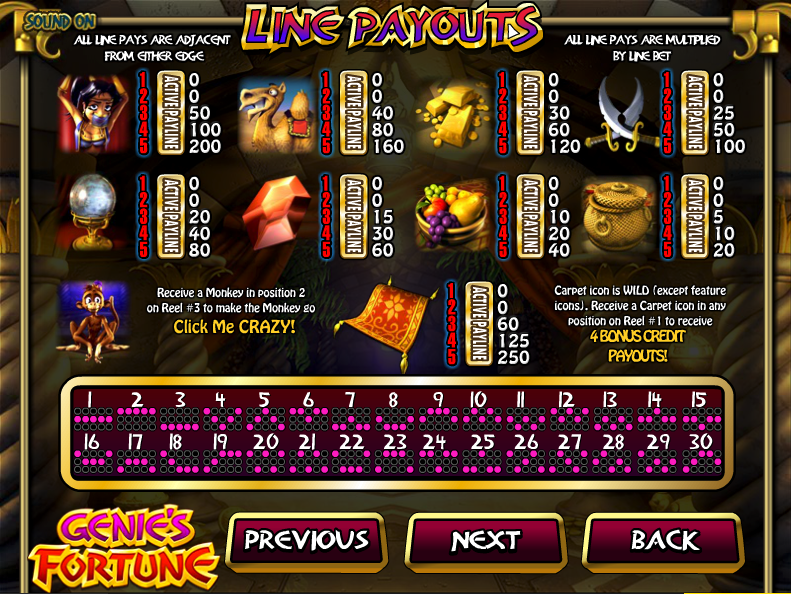 A trip to the mystical lands of the Middle East awaits players who are keen to check out an Aladdin-themed online slot; we’ve reviewed a fair few in the past but this one is Betsoft’s addition to the list and it’s called Genie’s Fortune. It’s full of animated characters and numerous bonus features so read the full review below for more information.

Genie’s Fortune is a five reel slot with three rows and up to thirty paylines; it’s set inside a plush desert tent with plenty of gold on show and there’s a suitably Arabian soundtrack to accompany your gameplay.

All the symbols are related to the theme and include the tied-up princess, a camel, gold bars, crossed scimitars, a crystal ball, an orange gem, a bowl of fruit and a snake-charmer’s basket.

The magic carpet is wild and there are several bonus symbols – the monkey, the magic lamp and the treasure chest – which all activate various extra features.

Land the monkey on the centre position of reel three and you will be prompted to click one of the surrounding symbols; the monkey will then shake that icon for a cash prize.

If the magic carpet lands on reel one it will slowly fly across the screen to the right, revealing a prize amount for each symbols passed.

This is triggered by landing three or more treasure chests anywhere in view for which you will receive the following:

It’s not possible to re-trigger the spins from within this round and additionally you cannot activate the other bonus features from here.

Trigger this game by landing three or more of the lamp symbols on an active payline. You will now be taken to a screen with the genie in the centre surrounded by six ‘wishes’ – wealth, fame, love, travel, wisdom and long life. Just pick your three wishes to reveal three prize amounts.

Genie’s Fortune seems to trigger the bonus features more regularly than any game we’ve ever played which is good news for those who appreciate those added extras. Winning combos animate nicely and the soundtrack helps speed things along nicely.