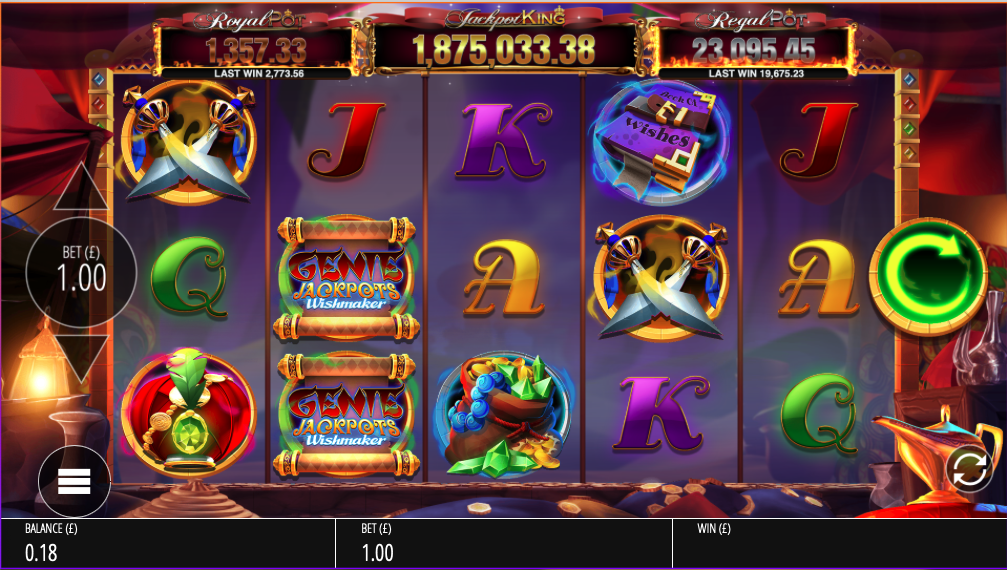 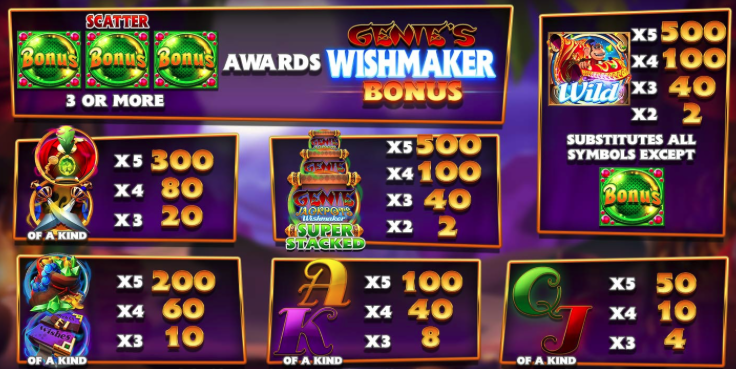 The fantasy world of Aladdin is the inspiration for this online slot from Blueprint Gaming which takes us on a virtual journey back to the Arabian peninsula in search of big wins; it’s called Genie Jackpots Wishmaker JK (the JK stands for Jackpot King) and it promises players a bonus wheel, seven base game modifiers and three progressive jackpots.

Genie Jackpots Wishmaker JK is a five reel slot with three rows and fifty fixed paylines; all the action takes place inside a luxurious desert tent strewn with gold coins and dimly lit by a lamp.

The high value symbols include the stacked logo, the crossed swords, the bag of jewels, the jewelled turban and the bound book; J, Q, K and A are the lower values. The magic carpet is wild and the green Bonus is the scatter symbol.

The following mini-features can be triggered at random on any spin:

Infectious Monkey Wilds – wild symbols landing on the next spin will spread to other positions.

Landing at least three of the green Bonus scatter symbols anywhere in view will grant one magical spin of the wheel to determine one of six features:

Genie Jackpots Wishmaker JK is connected to Blueprint’s Jackpot King progressive jackpot network and to trigger it you will need to land five of the Jackpot King symbols on reels one to five. You now get to spin a separate set of reels to collect crowns to work your way up the ladder (15 means you make it to the Wheel King). Spinning the Wheel will award a large bet multiplier or the progressive jackpot.

Blueprint occasionally bring out these slots with a huge number of bonus features so if you’re the sort of player who appreciates that along with this magical theme and a progressive jackpot then don’t miss it!