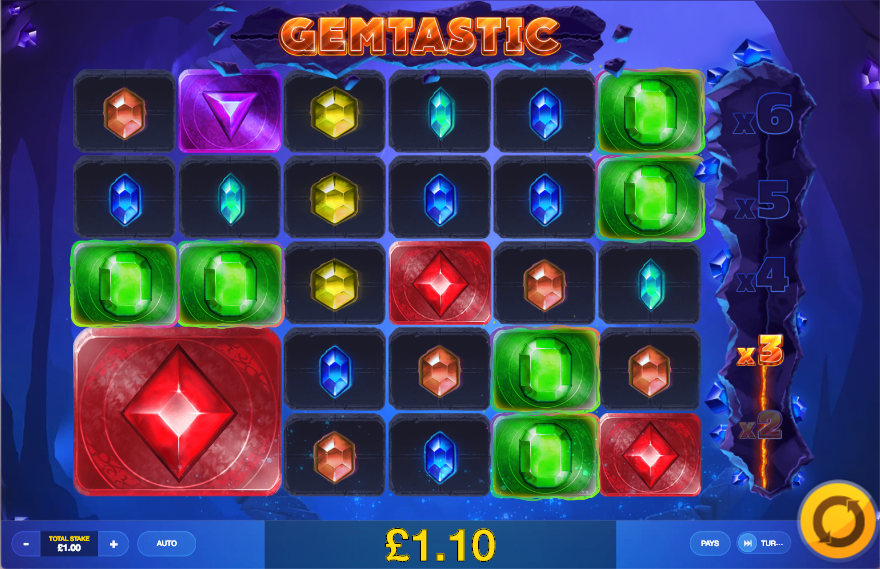 When the number of gems on screen reaches a certain amount there’s only one way to describe it and that’s Gemtastic – coincidentally that’s also the name of this online slot from Red Tiger Gaming which comes with collapsing reels, increasing multipliers and random wild symbols.

Gemtastic is a six reel slot with five rows and thirty fixed paylines; those reels are floating in some underwater cave where volcanic activity is just below the surface – you can just see the telltale fire on the multiplier ladder on the right hand side.

All the symbols are gems of varying sizes and colours – red, green, blue, yellow, you get the idea. All gems can appears as large, 2×2 or 3×3 symbols which should help out with some bigger wins.

The wild is a multicolour ‘W’ which will replace all others to help form winning combos – it has to be created through one of the features described below, it won’t just spin on to the reels.

The main feature revolves around the gameplay in Gemtastic with each winning combination disappearing and being replaced by more symbols falling in from above; new combos can then be formed and this process continues until there are no more wins. The good news is that each successive collapse will increase the win multiplier according to the ladder on the right hand side – up to a maximum of 15x.

On any spin one or more symbol positions may have a shimmering, coloured outline and if these are involved in a winning combo they will transform into wilds and fly off to other symbols positions. A 2×2 or 3×3 symbols will break up into several wilds.

Gemtastic is a lovely game to play – just set the Autoplay, sit back and watch as those collapsing reels crank the multiplier up for some (hopefully) big wins. It’s one of the best Red Tiger slots we’ve played.