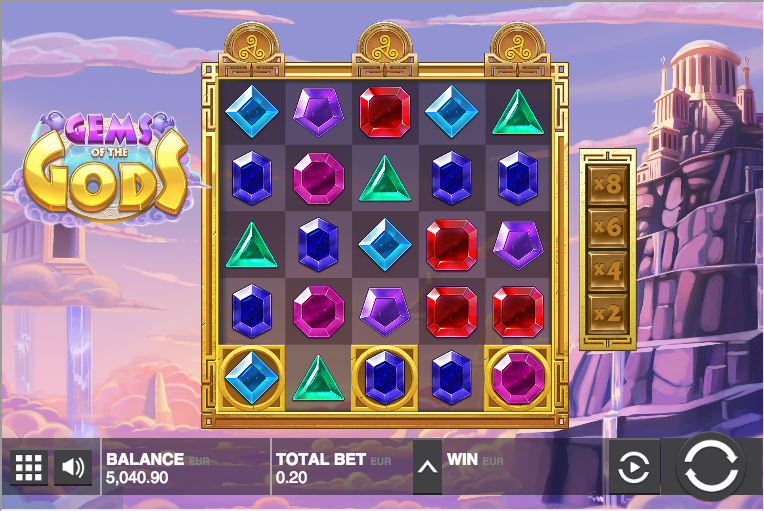 The lofty mountains and the temples in the cloud are our destination for this Greek gods-inspired online slot from Push Gaming; it’s called Gems Of The Gods and in fact it’s more of an arcade game than a standard slot due to it’s design and payline structure. It comes with two extra features which you read all about below.

Gems Of The Gods is played on a 5×5 grid within ornate gold-rimmed reels and the backdrop contains the temples of Olympus perched above the clouds as water cascades to the ancient Greek landscape below.

There are just six standard symbols and they are all coloured gems – red, pink, purple, blue, light blue and green; there’s also a bonus lightning symbol, a wild coin and a gold coin which are explained in more detail below.

Winning combos are formed with a least three matching symbols horizontally or vertically, those symbols disappear and those above fall into their place; this process continues until there are no more winning combos. Each successive combo increases the multiplier for this round.

If a lightning symbol appears anywhere on the reels this feature is triggered – it will randomly select one gem symbols and transform them all (and itself) into a different gem, increasing the opportunities for winning combos.

On each spin there are three gold coins just above reels one, three and five; if, during the process of gems matching and disappearing, any reach the marked positions at the bottom of the reels then the free spins will be triggered. Any coins which reach those positions become wild for the five free spins which are awarded.

More spins can be awarded if more coins make it to those positions during this round.

Gems Of the Gods is a really enjoyable diversion and the sort of game in which it’s best to set up the Autoplay, sit back and watch the action unfold. It comes with an RTP of 96.55%.