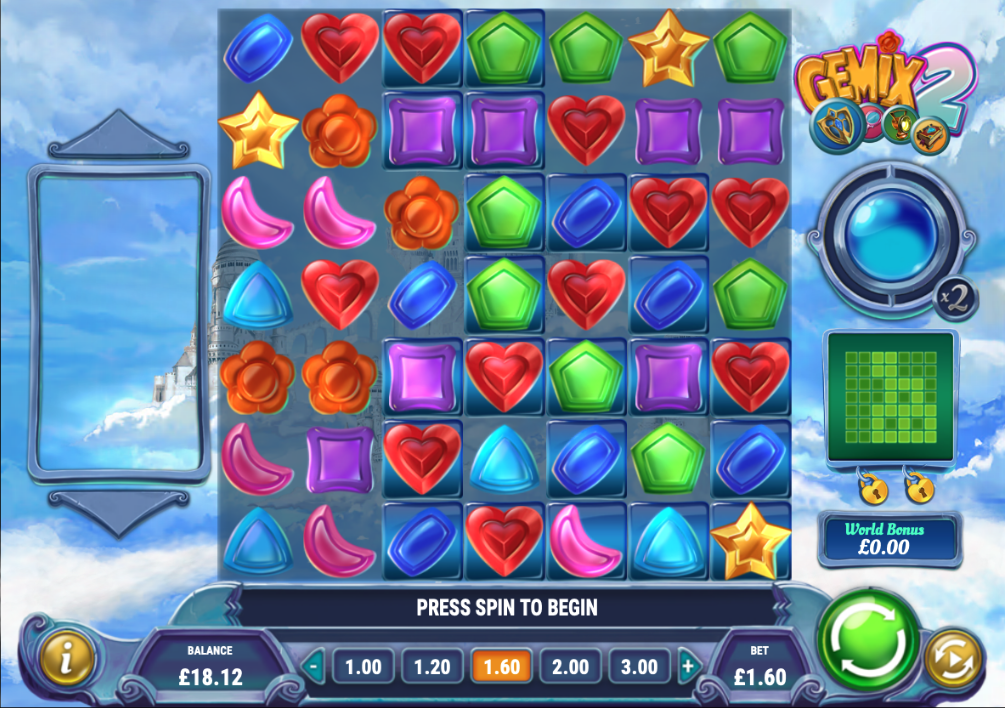 For a long time Gemix from Play N Go has been one of our favourite cluster-themed online slot machines so the good news is that there’s now a sequel called Gemix 2; match the gems from £0.10 per spin to earn base game power-ups, cash prizes from the shady G-nome and progress through four different worlds.

Gemix 2 plays out on the 7 x 7 grid you can see above and the aim is to create clusters of at least five matching symbols which connect horizontally and/or vertically; those symbols will then disappear and make way for more falling in from above to potentially extend the gameplay.

The box to the left hand side shows which world we’re currently in while on the right we have the green box displaying a pattern and above that the crystal which charges as winning combos are formed. The symbols are a range of coloured gems including a gold star, a red heart and a pink crescent.

The blue crystal requires the collection of twenty five symbols to fill it halfway and when that happens one of four power-ups will be awarded:

If you can Super Charge the crystal by filling it with fifty collected symbols all four of the above power-ups will be triggered one by one along with a 2x win multiplier; any further retriggers will increase the multiplier by 2x each time up to a maximum of 20x.

There are four worlds through which to progress and clearing two of the patterns shown on the right will get you on your way; patterns are cleared by creating winning clusters on the patterns which are also shown on the playing area. Between each world you’ll encounter the G-nome who’ll offer you a choice of two pockets which hopefully contain a small cash prize – this amount is incremented a small amount with each win in normal gameplay.

Each world has a guardian attached to it who’ll randomly award a wild feature during gameplay:

Fans of the original game will note that there’s not a great deal of difference here but then again why change a winning formula? The graphics have been poshed up, there’s an extra wild feature but otherwise this is more of the same very entertaining stuff.

Gemix 2 is a gem-themed arcade slot from Play N GO with a cluster gameplay mechanic.

Create combos of at least five connected matching symbols. Trigger one of the features.

Where can I play Gemix 2?