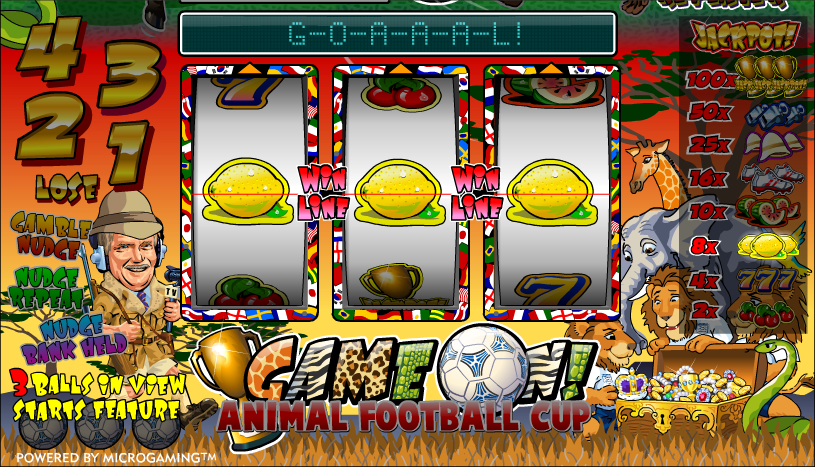 Veteran slots players will be well aware that the theme of animals playing sports is not a particularly new one; it’s a slightly odd premise but one which developers seem happy to promote. This one is called Game On!, it’s from Microgaming and it’s one of their fruit machine-style games which we always enjoy.

Game On! is a three reel game with just the one payline and it concerns the Animal Football Cup; the animals involved can be seen behind the reels, peering into a chest full of jewels. The archetypal commentator is on the left of the reels and bears an uncanny resemblance to that veteran of sports shows, Dickie Davis.

As with most of these UK-style slots, the lower value symbols are the standard cherries, sevens, lemons and cucumbers but then we have some football boots, a pith helmet, the referees whistle and the jackpot gold cup.

The bonus game in this slot is triggered by landing three of the footballs anywhere in view. Those footballs are little add-ons to the usual symbols and act as scatters in this game.

The animal will be selected automatically for you and then you just need to stop the flashing light on the highest multiplier available – it’s not too hard.

When you’re done you may also be offered an opportunity to have another go and this is a 50/50 gamble.

Nudges can be used to jog single reels down to try and make winning combos or to get the scatter footballs in view. They are awarded randomly and can sometimes be gambled, repeated or banked for one spin.

Holds are also randomly awarded and allow the player to freeze certain reels with the same aims.

If you’re trying to trigger the feature, use the nudges and holds wisely because they can be a real help. However, it might be better going for the combos anyway as they seem to land pretty regularly.

This is a little less involved than some of Microgaming’s other fruit machine-style slots but it’s an amusing premise. The bonus feature is quite hard to trigger but pretty lucrative when you manage to get there.