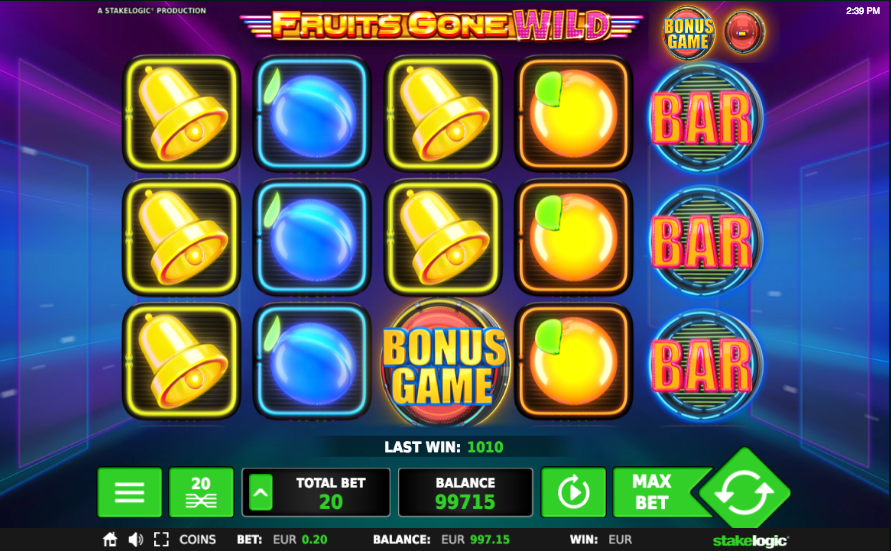 Fruit is obviously the staple diet of a growing number of fruitarians but as far as we’re concerned it’s the recurring theme of many an online slot machine; there’s one more here, it’s called Fruits Gone Wild and it’s developed by Novomatic subsidiary Stakelogic – you can find out how it all works below.

Fruits Gone Wild is a five reel slot with three rows and twenty fixed paylines; it’s a multicolour affair with a constantly moving neon backdrop to symbols which float freely in the foreground.

There’s a traditional range of symbols to enjoy and these include a golden star, a red Bar, a red seven, a golden bell, bunches of grapes, plums, oranges, limes and cherries.

The wild is big pink ‘Wild’ which will substitute for all others to help form winning combinations except for the bonus symbol; the wild is not an actual symbol but on each spin up to three will materialise on the reels in various positions. At random they may also increase in size to become 2×2 wild symbols for some extra winning potential.

This is triggered by landing three or more of the bonus symbols anywhere on reels one, three and five; you’ll initially receive just five free spins but during normal gameplay whenever just two bonus symbols land, one extra spin is added to the total in the top right hand corner – this number is added to the five spins to get your total.

Once the spins start, one, two or three bonus symbols landing will award an extra one, two or five spins respectively.

Fruits Gone Wild is colourful, engaging and quite a lot of fun, we found it a little tricky to trigger the feature but by the time we did we’d collected lots of free spins (as you can see from the video above). Check it out – it comes with an RTP of 95.35%.