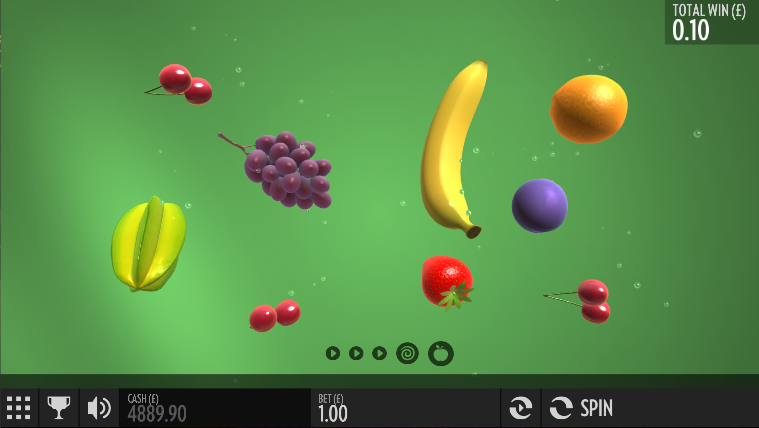 When is a slot not quite a slot? When it takes the form of Fruit Warp, a brand new game from Thunderkick which combines some beautiful graphics with some creative gameplay to produce an innovative and very high quality machine. If flying fruit has been missing from your life recently then this game may just have the answer – read on for more information.

Fruit Warp has no reels or paylines as such and so we’ve categorised it as an arcade game rather than an online slot. Load it up and after watching the explanatory intro movie you will be faced with a screen showing nine pieces of fruit floating on some sort of liquid green background. Click spin and a new selection of fruit will be propelled towards you from the distance. The aim of the game is to land three or more of the same fruit to win money and to activate the bonus feature.

The nine symbols are all fruit and these are cherries, plums, strawberries, oranges, bananas, grapes, starfruit, kiwano melon (we had to look that up) and dragon fruit.

The way to trigger the bonus features is to land four or five of the same type of fruit on any single spin. Five fruit will take you straight to the feature (more below) but if you land four, those will remain in place while the others respin (Portal Respin). Land another to match those frozen symbols and you will now have five, enough to start the main feature. Fail and it’s back to the main game.

The main feature will start automatically when you have those five symbols (it’s all in the video above). A scale will appear underneath the fruit and you must try and work your way along this, collecting multipliers until you reach the end.

The way to move along the scale is to land at least one of the fruit which triggered the feature on each spin. You may also be lucky and collect an extra life which will give you an extra spin if you fail to land a matching symbol.

This is an absolutely lovely game to play; it’s incredibly simple but really compelling at the same time. the graphics, animations and sound effects are top notch and we insist you give it a go.