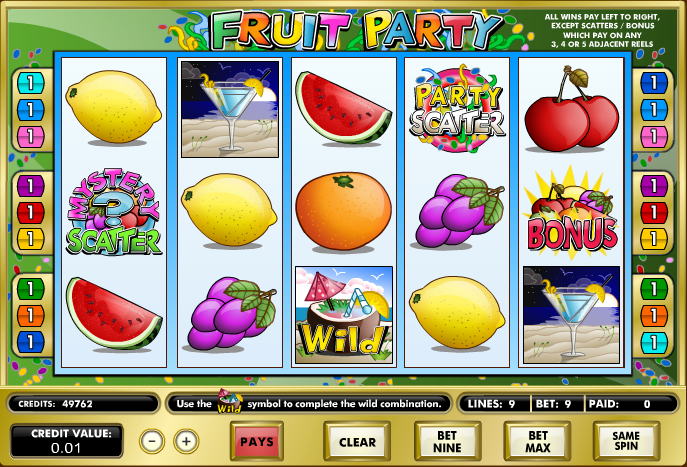 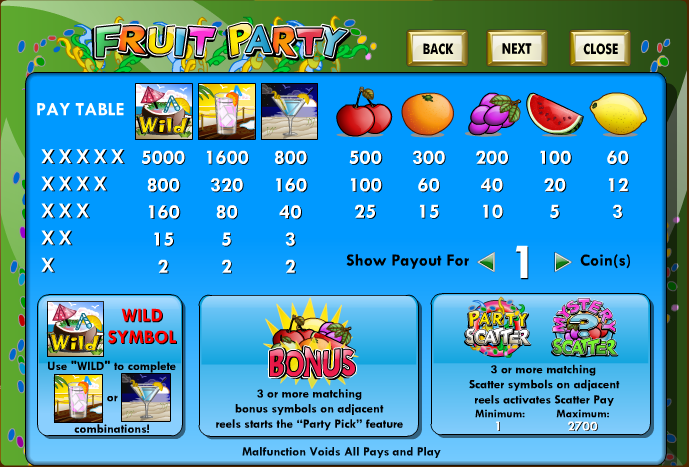 While fruit may not be the obvious theme for an online slot machine, the fact that it has been used as the symbols since these games were first introduced makes it seem a little more appropriate. There are even enough fruit-themed slots for us to be able to pick our top five which you can see here. Amaya Gaming has one more to add to the list, it’s called Fruit Party and you can read about it below.

Fruit Party plays out over five reels and nine paylines and as well as fruit, the theme is partying and cocktails. The symbols reflect the theme and include lemons, watermelons, grapes, oranges and cherries along with two tempting-looking cocktails.

The wild symbol is another cocktail but it only substitutes for other cocktails, not the lower value fruit. The bonus symbol is a sort of fruit salad and there are also two scatters – a Party Scatter and a Mystery Scatter – which will pay out for three or more anywhere on the reels.

This is hardly a bonus feature really but if you can land three or more of either the Party Scatters or Mystery Scatters anywhere on the reels, a box will pop up displaying your prize. Quick and painless!

Landing three or more of the bonus feature fruit salad symbols anywhere on the reels will trigger this game. A table will be displayed on which are a collection of twelve drinks and bits of fruit. All you have to do is start picking them to reveal multipliers of 1x, 2x or 5x.

When you find ‘Collect’ the round is over but if you get it on the first pick you will win everything. Triggering the bonus with four or five symbols will apply an extra multiplier of 2x or 3x to the total prize.

Fruit Party is clearly a little dated when compared to newer games but it’s bright and cheerful and if fruit is your theme of choice, why not give it a go?