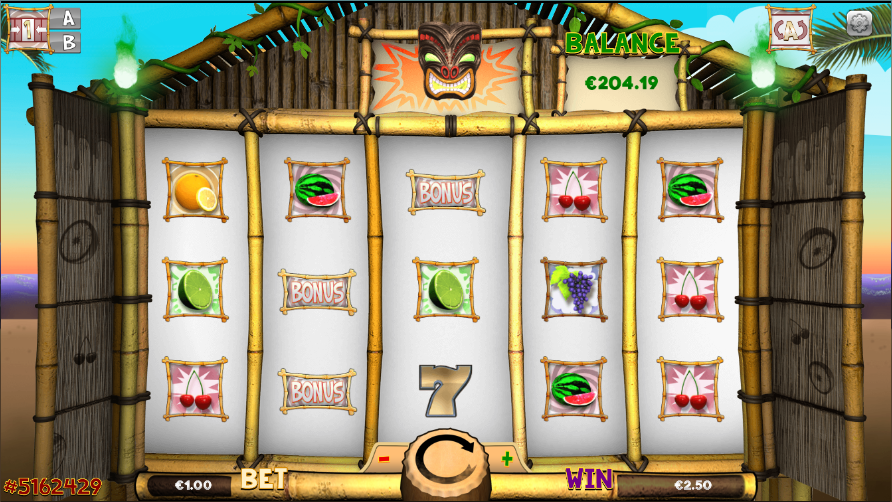 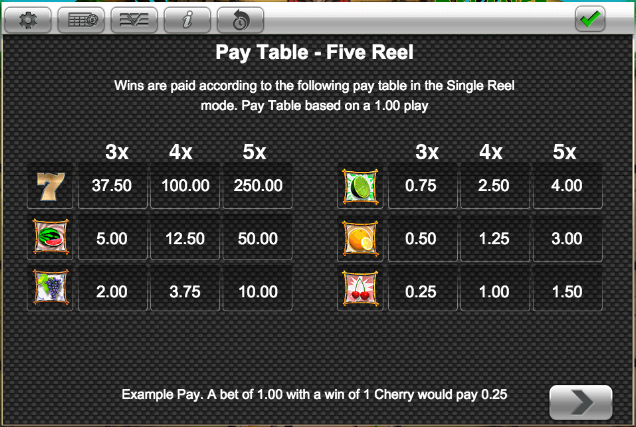 We’re on a beach, the sky is blue and in front of us there’s a bamboo cabinet containing an online slot machine – it’s the perfect combination of nature and technology and it’s called Fruit Loot Reboot. It’s a game developed by Concept Gaming with some unusual twists and you can read all about it below.

Fruit Loot Reboot is a five reel slot with three rows and twenty fixed paylines (although there are other payline structures which we’ll talk about in a bit); those reels spin within bamboo struts illuminated by green flames on either side.

In the base game there are a fruit range of symbols including watermelons, grapes, limes, oranges and cherries; there’s also a gold seven and a ‘No Win’ skull and crossbones icon.

There are no wild symbols but there is a bonus icon which is the key to one of the features.

The default setting for this game is the five reel option as shown in the screenshot above but by using the little A/B button in the top left hand corner you can change this into the following layouts:

Note that the main bonus can be triggered from all three reel layouts.

This is triggered by landing 5 bonus symbols in the five reel layout or three in the alternate layouts; you will now get to spin the Bonus Wheel which determines which of the following features are won:

Fruit Loot Reboot offers a bit of everything to players and should suit you whether you prefer five reel slots or something a bit simpler; the main feature seems easy to trigger and there’s a nice high RTP of 97.24%.