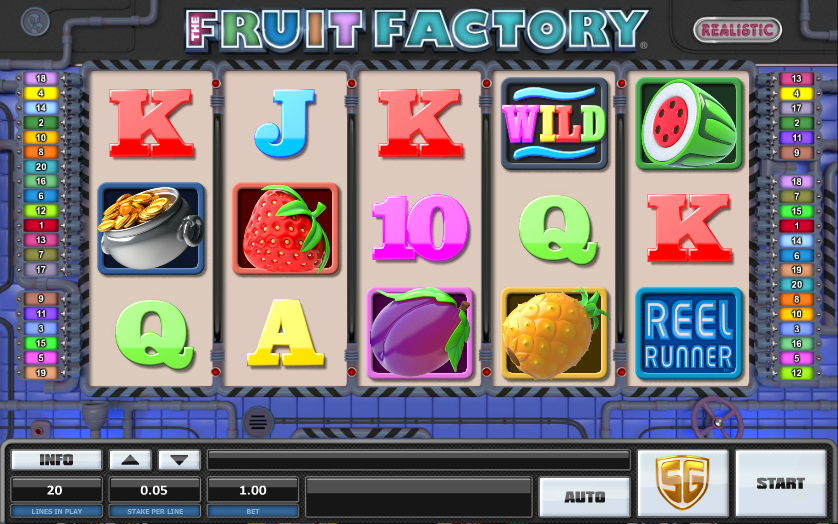 There are some traditional aspects to this online slot from Realistic Games but they are combined with a slightly industrial feel to provide us with something a little different from this particular developer. It’s called The Fruit Factory and it includes an interesting bonus feature plus an optional Super Game mode which we shall explain in more detail below.

The Fruit Factory is a five reel slot with three rows and twenty fixed paylines; the largely traditional symbols spin on reels which are part of an apparatus of pipes and valves – all part of the fruit factory of the title.

There’s a reasonably standard range of symbols here to match the theme and they include pots of gold, watermelons, strawberries, pineapples and plums; lower values are represented by 10, J, Q, K and A.

The wild is a colourful ‘Wild’ icon and it substitutes for all others except the Reel Runner scatter symbol which activates the main feature.

This is triggered by landing three or four of the Reel Runner scatter symbols anywhere in view (five will award 250x your total bet but no feature.

The first thing to do is press the ‘Stop’ button in the Fruit Selector to determine one particular fruit (as you can see from the video above). You now play a 3×3 set of reels which only features your selected fruit, the Jackpot symbol and blanks.

Spin these reels until you form a win then press the ‘Spin’ button again to select just one reel which will flash red; now press the button again and if any other reel is picked you get another respin. Keep repeating this process until you finally pick the red reel twice or win the jackpot.

This is an optional gaming mode which will cost ten times the standard game but offers five linked, enhanced spins when you press the big ‘SG’ button below the reels.

During these spins the Reel Runner symbols becomes wild and remains in place for the duration of those spins; these are also collected in the meter below the reels and any bonus rounds/payouts are awarded when the five spins are over.

The Fruit Factory is something a little different from Realistic Games but it’s enjoyable with plenty of variety to keep things interesting. The RTP is 95.46% and this is one we would recommend.