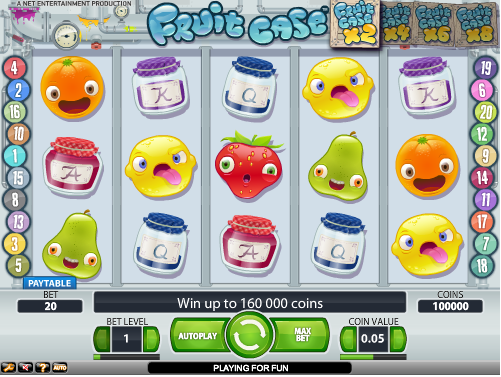 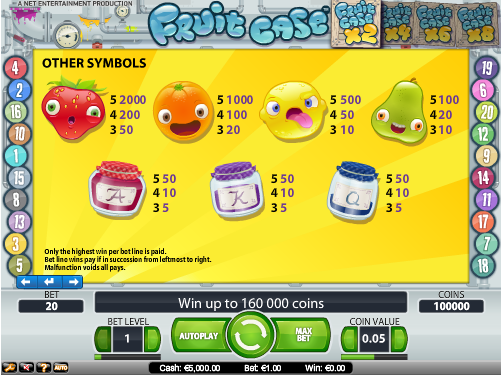 If you never thought you’d see an online slot based on jam-making then it’s time to think again; Net Entertainment‘s Fruit Case is a lovely-looking slot which features some cheery, fruity characters being turned into jam on every spin.  We’ve reviewed games such as Funky Fruits Farm and Fruit Shop before but this is a little different.

So we’re in some sort of jam factory and this game features five reels and twenty fixed paylines; playing cards are used as the low value symbols here but each one is plastered onto the front of a different-coloured jam jar.  The fruits which represent the more expensive symbols are a pear, a lemon, an orange and a strawberry but there’s also a food blender (the Free Fall symbol) and the Fruit Case wild symbol.

This is always a favourite feature of ours and this is how it works – each time you land a winning combination, the symbols which make up that combo will be squashed in a press and disappear, leaving gaps into which new symbols will fall.  There’s now a chance to make a new combo and if that happens the multiplier for the win will increase by 2x to maximum of 8x.

The Free Fall feature is triggered by landing three Food Blender symbols on reels one, two and three and if you manage that you’ll win ten free spins.  That’s it really but you will get a 3x multiplier for any winning combinations you form in the bonus round.

We’ve already touched on this symbol above when talking about the Avalanche Feature but you need to create a first winning combo with a wild symbol to kick off the increasing multiplier feature.

If you like seeing cute fruit get squashed and turned into jam then this is the game for you; the Avalanche Feature is probably more entertaining than the Free Fall bonus game but it’s all good and we heartily recommend this slot.