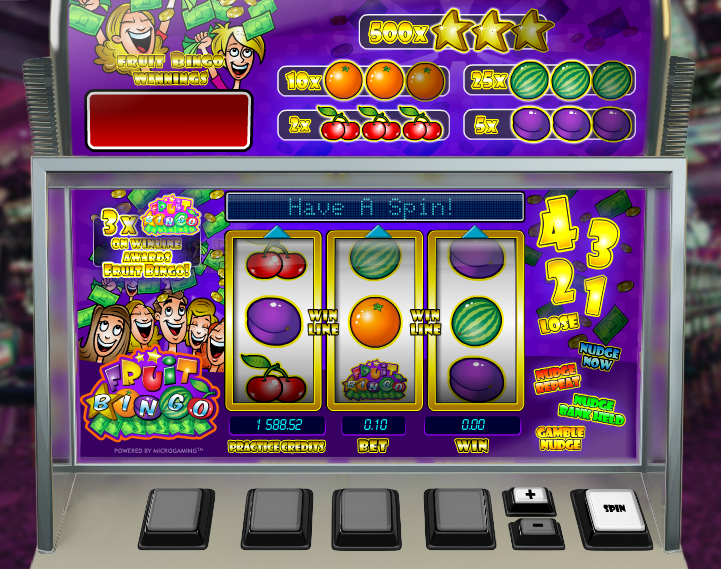 There’s an increasingly wide range of three reels slots offering various bonus features in addition to symbol wins and Microgaming’s Fruit Bingo is one such game.  These games appeal to those online slots players who prefer the classic style but they also offer something to those who appreciate some integrated bonus features.

Fruit Bingo is a three reel and one payline slot and most of the machines is in view which gives the impression of actually being in a casino; that impression is reinforced with the photorealistic background in view.

There are only six symbols here and they include plums, cherries, melons, oranges, stars and the Fruit Bingo logo which activates one of the bonus features.

Fruit machine fans will appreciate the appearance of nudges and holds here; they’re awarded randomly and can help you out as follows:

Landing three of the Fruit Bingo symbols on the one payline will kick off this feature; it’s not a bad money maker and the reels will spin again and again.  Each time they stop, the fruit on the payline will fill up one of the spaces above the reels; when all the space next to a fruit are full you will be awarded that win.  The spins continue a random number of times.

The game helps you out when you’re nudging – if there’s a possible win the potential winning fruit above the reels will flash and this should point you in right direction. A second tip – if you get the chance to gamble your nudges then do it, it’s easy to win.

This is good stuff, both for classic slots fans and for those who like the added extras. All the features get triggered pretty regularly so there’s no reason to get bored.