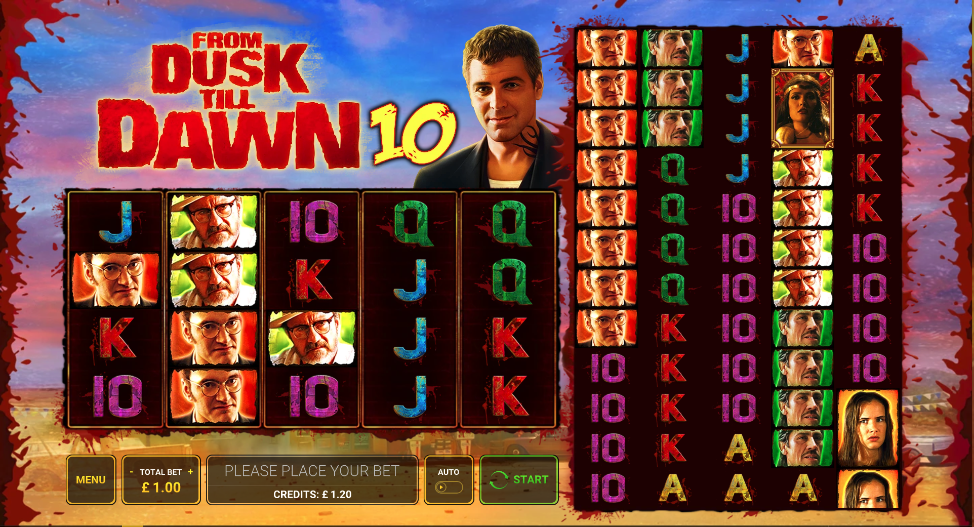 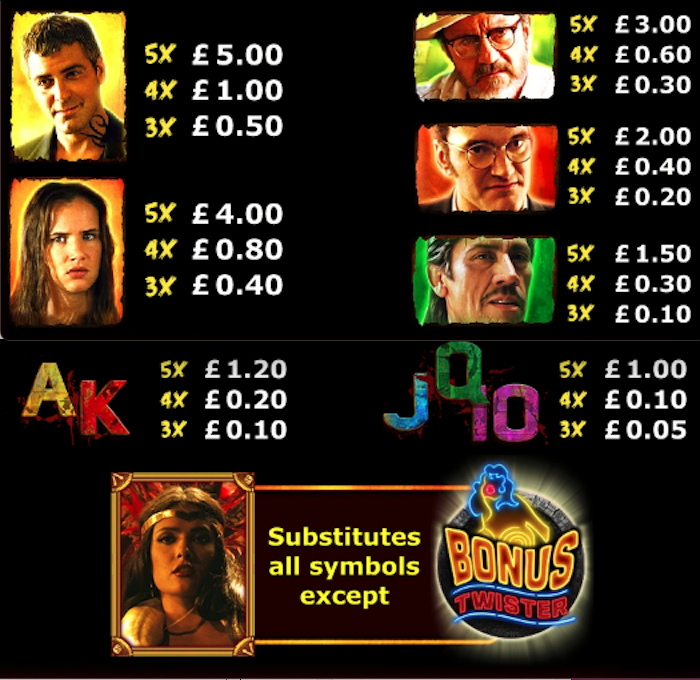 One of the great vampire movies of the 1990s, From Dusk Till Dawn stars George Clooney and Harvey Keitel among others stuck in a Mexican bar full of the undead; Novomatic/Greentube have brought this tale to the reels with an online slot of the same name which, from £0.20 per spin, promises players a range of themed bonuses.

From Dusk Till Dawn 10 is a five reel slot with one hundred paylines but as you can see from the screenshot above the playing area is split into right (colossal) and left reel sets. Blood spatters the edges of the screen as the dusty desert backdrop sets the scene.

The high value symbols are some of the characters from the film – Seth and Richard Gecko, Jacob and Kate Fuller and Razor Charlie; 10, J, Q, K and A are the lower values. Santanico (Salma Hayek) is wild and if she appears on the left set of reels in the base game she’ll dopy herself over to the corresponding position on the right set and expand. The Bonus Twister is the special symbol.

From Dusk Till Dawn 10 Bonus Features

This can occur randomly at the end of any spin and a symbol will be selected at random to lock in place; the reels will now spin until no new matching symbols land and lock in place. The chosen symbol can also be levelled up by collecting the Sheriff’s badge – reaching Seth on the trail will provide the biggest winnings.

Landing at least three of the Bonus Twister symbols anywhere on reels one, three and five of either reel will trigger this feature and the number of spins of the bonus wheel you receive is equal to the number of bonus symbols.

The prizes on the wheel are cash and/or free spins and the spins start when there are no more wheel spins left; during this round the wild symbol will again transfer from left to right reel and here it will expand in random directions and shapes to help out.

This isn’t Novomatic’s first For Dusk Till Dawn outing and it’s probably the better of the two with the unusual reel setup and clever features; if you were a fan of the movie (like us) then this slot has lots to offer.