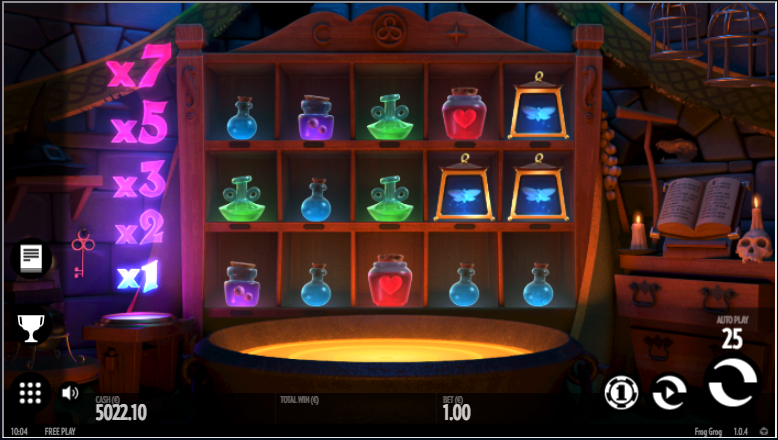 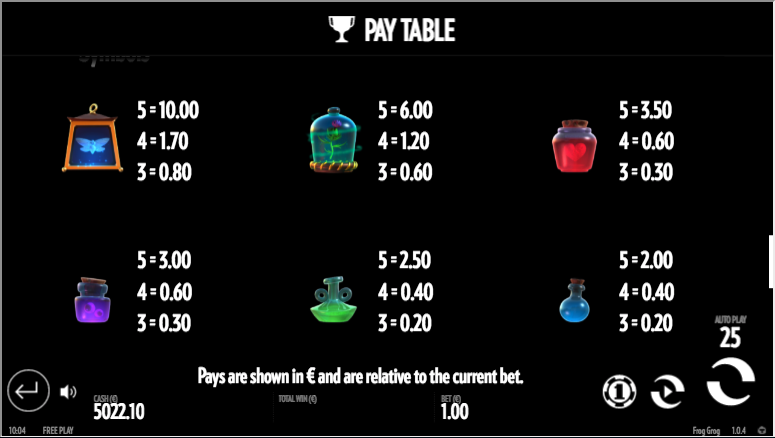 The lab of a mad scientist is always a good location for an online slot machine so we’re quite happy to see that Thunderkick Games have come up with a game full of colourful potions, skulls and spell books. It’s called Frog Grog, it includes some creative bonus features and you can read all about it below.

Frog Grog is a five reel slot with three rows and twenty three fixed paylines; the reels take the form of shelves in the lab with the symbols as various objects thereon. It’s a gloomy lab but in the background we can just make out objects such as skull candlesticks, books of magic and slowly swinging bird cages.

There are just six standard symbol and these include four items in jars – a moth, a flower, a heart and a pair of eyeballs – and green/blue potions.

The frog is the wild symbol and he will substitute for all others to form a winning combo – he will also remove all other symbols in his row and column and other symbols will fall into those places.

This is a feature we always like in a slot – each time you land a winning combo those symbols involved will disappear to be replaced by more falling down from above; this new layout can then create more combos and the process continues until there are no more wins.

As an extra feature the multiplier for any wins will increase on each new drop – 1x, 2x, 3x, 5x and finally 7x.

This is triggered randomly on any non-winning spin and you will see that all symbols except the moth, the flower and the wild frog are removed from the reels, giving the chance for higher value wins once new symbols have fallen into place.

Frog Grog is a lovely game to play and it maintains the high standards and creativity of previous Thunderkick slots; it comes with an RTP of 96.10% and is very highly recommended.