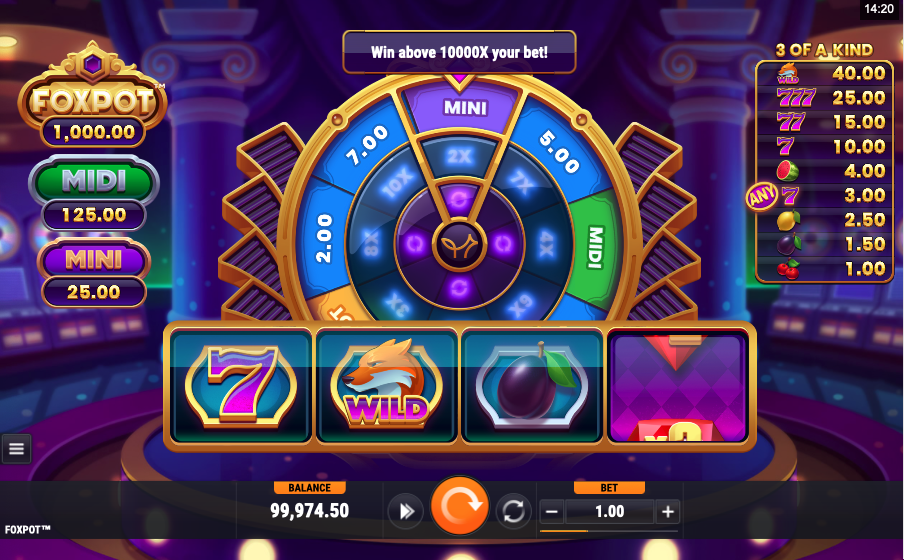 Some online slots can be simple and complex at the same time and that’s the case with this three reel release from Foxium; it’s called Foxpot and hiding behind its single row is a prize wheel, an extra multiplier reel and three jackpot prizes.

Foxpot is a three reel slot with one row and just the single paylines; the setting is a brightly lit casino in which one armed bandits and gaudy columns complete the scene.

It’s a fairly simple paytable comprising purple sevens (which can be single, double or triple), watermelons, lemons, plums and cherries; a mix of sevens will also win a payout of 3x the stake. The fox is wild and it will replace all standard symbols to help create winning matches; the Bonus is the special symbol.

The fourth reel is the multiplier reel and it may land on a 2x or 3x multiplier, applying that value to any win on that particular spin.

This can occur at random, nudging a Bonus symbol into view in the base game or nudging the Money Award Wheel a bit for a better result there.

Landing one, two or three of the Bonus symbols on the reels will award one of the following:

Foxpot is really engaging stuff and a demonstration of how to design a single payline slot with plenty of bonus features attached; the graphics and animations are crips and bright and there’s a higher-than-average RTP of 96.31%.