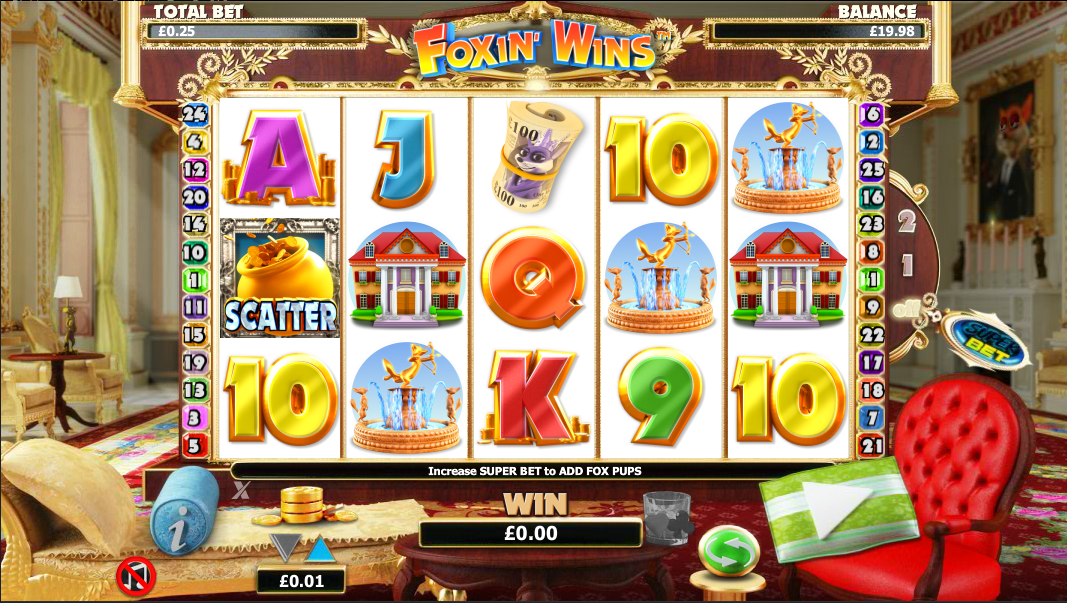 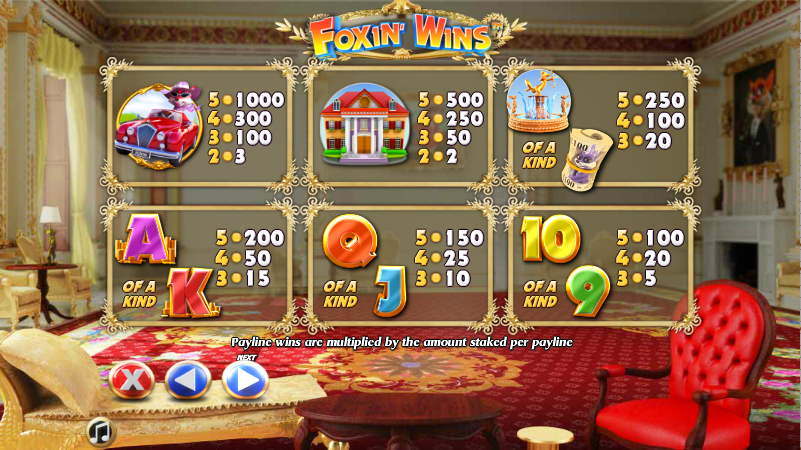 We haven’t reviewed too many online slots from NextGen Gaming but the ones we’ve played have been of a high quality.  Foxin’ Wins is a brand new game from this company featuring a mega-rich fox in the leading role and the game also contains NextGen’s Superbet feature which adds an extra layer of excitement to the proceedings.

Foxin’ Wins features some of the best graphics we’ve seen to date and it’s fair to say that they rival Net Entertainment and Quickspin in quality.  There are five reels and twenty five fixed paylines all set against the backdrop of a richly decorated room.

The main symbols are the trappings of a luxury lifestyle such as a big roll of banknotes, an ornate fountain, a mansion and a vintage car.  The bonus symbols include a fox wild and a gleaming pot of gold scatter which triggers the free spins.

Without using this feature there’s a random chance that the fox will pop up on reel three and turn a position wild.  If you select Superbet level 1 the fox can appear on reels two, three or four and with Superbet level 2 can appear on all reels.  Level 1 costs ten extra credits and level 2 25 more.

Those aforementioned free spins are triggered by landing three or more of the pot of gold scatter symbols anywhere on the reels and you’ll be rewarded with ten free spins.  The fox wilds will also be active during the free spins and all wins are doubled.

After any spin you may notice the leprechaun run across the screen pursued by the fox – if the fox catches him he’ll turn him upside-down and empty his pockets, winning you some money.

Fox funds is also a randomly awarded prize and it will provide you with an instant win if you hit it.

If you haven’t gambled enough yet you can opt to wager your most recent win on the turn of a card; a correct colour will double your money while a correct suit will quadruple it.

If you can, use the Superbet level 2 – lots of wilds can potentially earn you some big money plus even more foxes will be in evidence when you trigger the free spins round.

There’s nothing not to like about this slot – it has humour, some great graphics and animations and a veritable feast of bonus features to enjoy. Help the fox keep the leprechaun at bay.