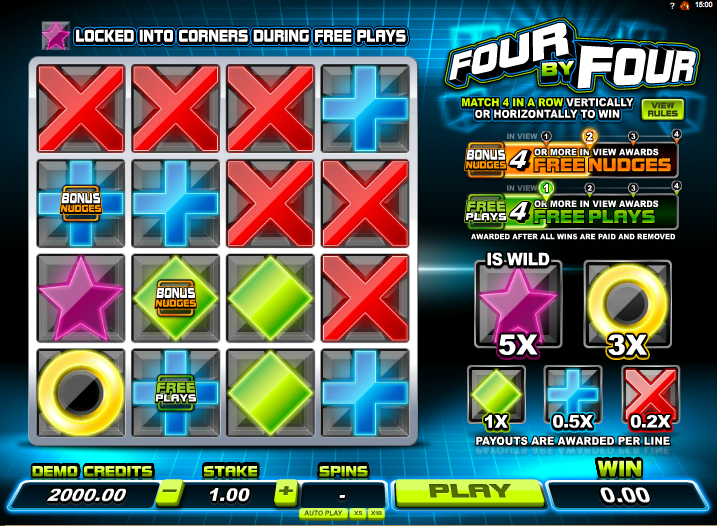 This is the sort of game we like; it’s called Four By Four and it features elements of an online slot combined with an arcade puzzler and the result is a really engaging game. It’s by Microgaming and available to play at Bet Victor so read on to find out how to play it.

Four By Four does pretty much what it says on the tin, the main gameplay takes place on a  4 x 4 grid and the basic idea is to make horizontal or vertical lines of four matching symbols. The grid is on the left of the screen and to the right you can see the pay table beneath the Free Nudges and Free Plays notifiers.

The symbols comprise a cross, an ‘X’, a diamond and a circle plus a purple star which acts as a wild.

This is always a popular feature, at least with us, and it works like this – each time you make a winning line, those symbols involved will disappear and more will fall into place. Those new symbols can then create their own winning lines so lucky players can win lots of money in just one spin.

There’s a pretty lucrative free play round bonus available here and you can trigger it by landing four or more of the Free Play symbols on the grid. You must wait until any cascading symbols have stopped before the free plays start and this means that you could have four on the grid and then see them drop off before the bonus is awarded.

You will only receive four free plays but all four corners are frozen wilds, dramatically increasing your chances of winning as you can see from the video below.

This is not as much fun as the free plays but it’s worth having; it’s triggered by landing four or more of the Bonus Nudges symbols on the grid.

You will now get four chances to nudge any row or column horizontally or vertically in an attempt to make a winning line. Once you’ve triggered a win the bonus ends.

This is really good fun and be warned that it’s quite difficult to stop playing once you start. Don’t let that stop you though – check it out now.