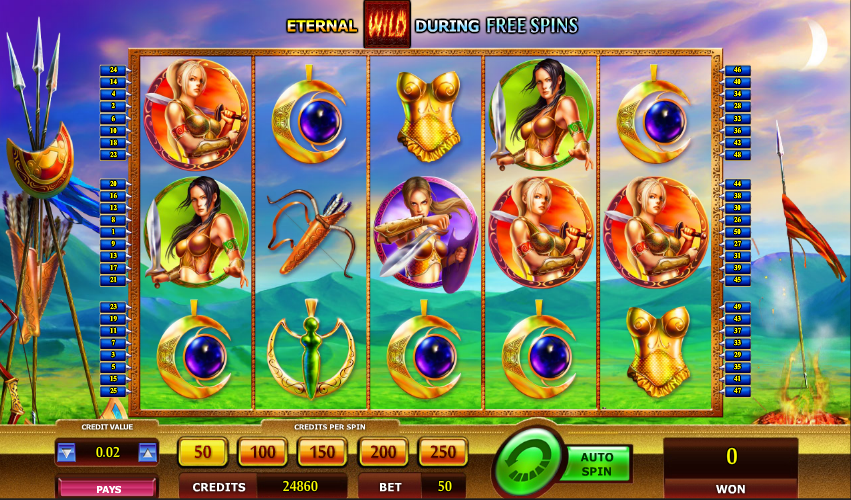 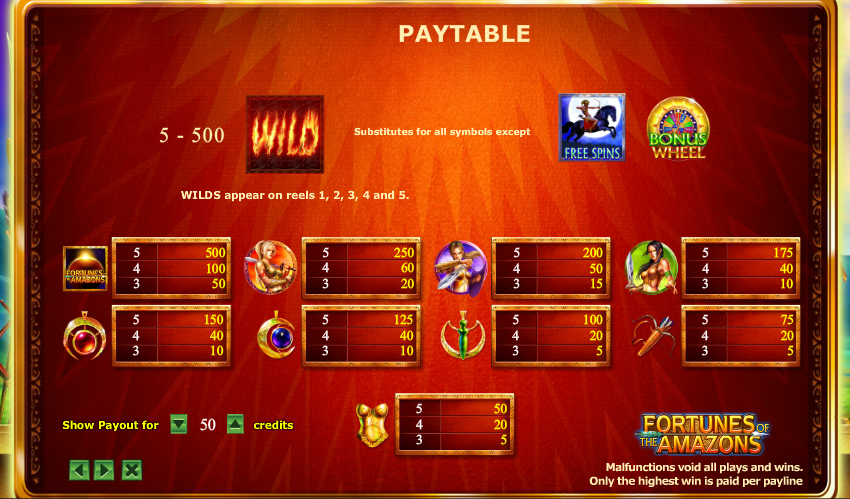 All well-read online slots players will of course know that the legendary Amazons were a tribe of fighting women, originating from what is now Eastern Europe or North Africa. Fortunes Of The Amazons is based on these famous characters and is developed by Side City Studios under the umbrella of Amaya Gaming. Read the full review to below to find out about the three separate bonus features.

Fortunes Of The Amazons is a five reel slot with three rows and fifty fixed paylines; behind those gold-framed reels there’s a wide open landscape of grassland and low hills. Spears and shields are stacked up in the foreground.

The symbols are all related to the theme and include a Fortunes Of The Amazons logo, three warrior women, three items of jewellery, a breastplate and a bow/arrow/quiver.

The wild symbol is a fiery ‘Wild’ and there are two scatters – the bonus wheel and the Amazon on horseback – which trigger separate features.

This is a randomly occurring bonus which can happen after any base game spin; you will receive one free spin with four wild symbols added to the reels. The following two features can also be triggered from this spin.

This is triggered by landing three of the ‘Amazon on horseback’ symbols anywhere on reels two, three and four; you only get five free spins but a wild symbol is added to the reels on each spin, remaining in position for the rest of the round. There are no special symbols on this reel set meaning that you can’t trigger any of the other bonus games from here.

Trigger this feature by landing three of the bonus wheel scatter symbols anywhere on reels one, three and five; as you can see from the video above you now get to play a Wheel Of Fortune-style game and this wheel has two concentric circles, one to award a prize and one to award a multiplier. Just click ‘spin’ to get things moving.

Fortunes Of The Amazons is a pretty high quality slot with an interesting theme and some welcome (if not particularly inventive) bonus features. We enjoyed playing it and would recommend it although the minimum wager of £1.00 may put low rollers off.