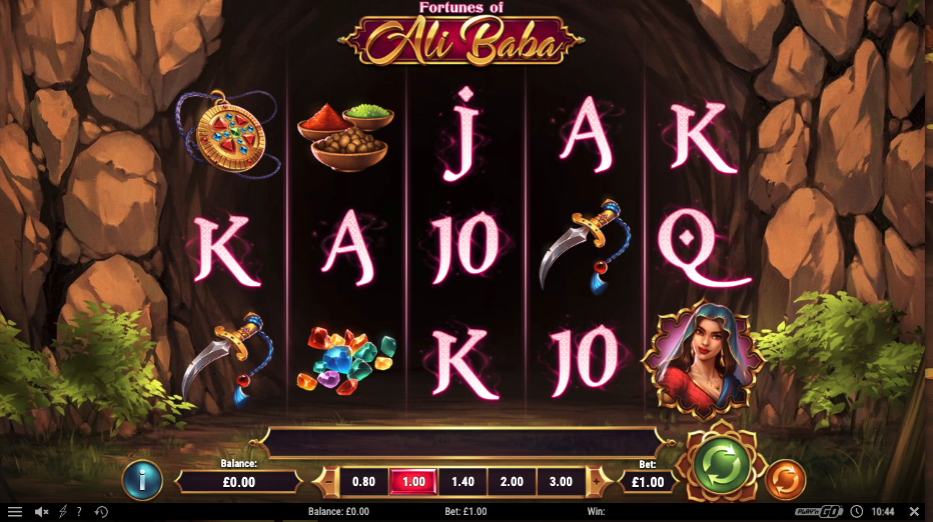 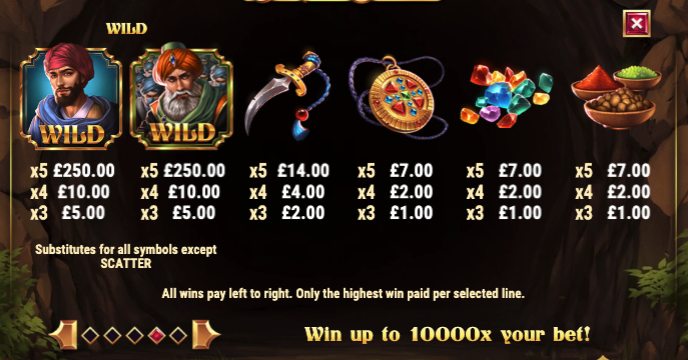 The tale of Ali Baba and the Forty Thieves is the ancient tale of the woodcutter and his discovery of the den of thieves; it’s been the theme of many online slot machines in the past and here’s one more for our pleasure – it’s called Fortunes of Ali Baba, it’s developed by Play N Go and it offers players the chance to grab cash and free spins in the famous den.

Fortunes of Ali Baba is a five reel slot with three rows and twenty fixed paylines; there’s an Arabian soundtrack to the gameplay which takes place in the entrance to the cave, accessed in the story by the words ‘Open Sesame’.

The four higher value symbols include the curved dagger, the golden pendant, the selection of jewels and the bowls of herbs and spices; 10, J, Q, K and A make up the lower values. Ali Baba is wild in the base game and he’ll replace all standard symbols to help create winning matches; the slave girl is the scatter symbol.

Landing two of the slave girl scatter symbols anywhere on reels one and five will trigger the Den of Thieves feature and you’ll now get to enter the cave and pick from sets of pots; these pots will reveal cash prizes, free spins or a symbols which will end the round.

If you win the free spins there are eight awarded with Ali Baba present on every spin – if a thief wild also lands on the reels it will award one extra spin during which it the thief will move towards Ali Baba, leaving a trail of wild symbols in his wake.

If the slave girl appears on reels one and five again she’ll award two extra spins.

Fortunes of Ali Baba is certainly one of the better slots themed on this famous tale – it doesn’t overcomplicate things but the Den of Thieves feature triggers regularly and it’s quite enjoyable to work your way into the cave, picking prizes from the pots as you go.