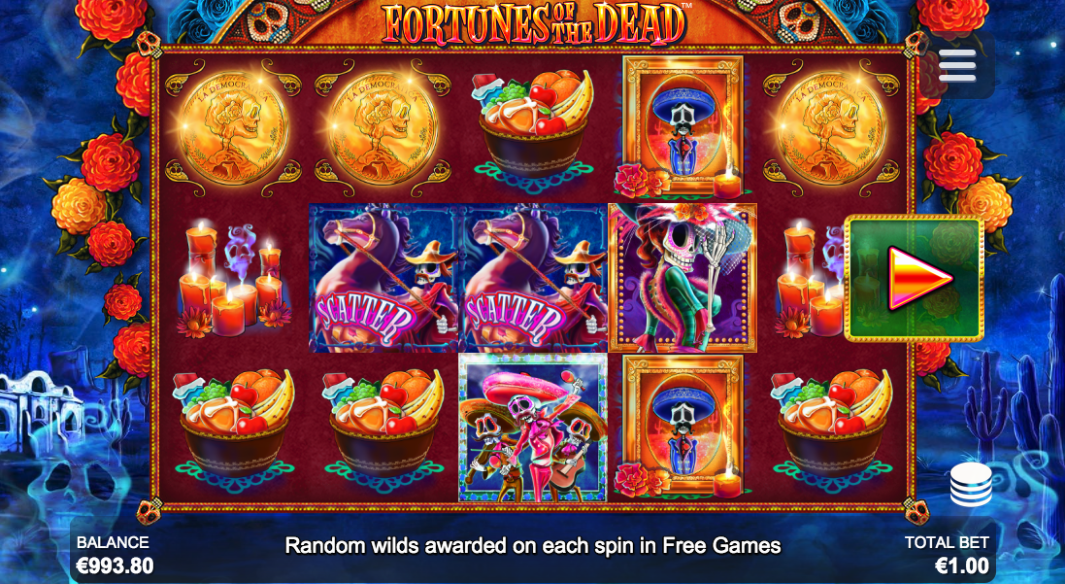 Online slots based on the Mexican Day of the Dead can often be confused with something more disturbing, especially at Halloween, but here we have one more game themed on the former; it’s called Fortunes of the Dead, it’s developed by Side City Studios and it comes with several bonus features.

Fortunes of the Dead is a five reel slot with three rows and fifty fixed paylines; those reels and their surroundings are very colourful but set against the backdrop of ghostly vision of cacti and buildings in the desert.

All the symbols are related to the theme and comprise various skeleton characters (including the obligatory Mariachi band), a barbecue, a gold coin, a basket of fruit, a stack of skulls and some candles.

The wild is a skeleton with a bull and he will replace all others in winning combos except for the two bonus symbols – the skull and the horse riding skeleton.

Once In A Wild

This occurs randomly on any spin and you will be awarded one free respin with four wilds placed on the reels. You’re guaranteed a win of at least 50% of your total bet (which is not really that generous but still..).

This is triggered by landing three of the horseback skeletons anywhere on reels two, three and four and you will be awarded five free spins; on each spin a wild will be added to the reels and will remain in that position until the spins have ended.

Trigger this by landing three of the skull symbols anywhere on reels one, three and five and all you have to do is pick one of those skulls to reveal a cash prize based on your stake.

There’s plenty to like about Fortunes of the Dead – it’s atmospheric, it looks good and it comes with three separate bonus features to enjoy; we found the free spins to be the most lucrative. This game comes with an RTP of 95.79% and is certainly worth a look.