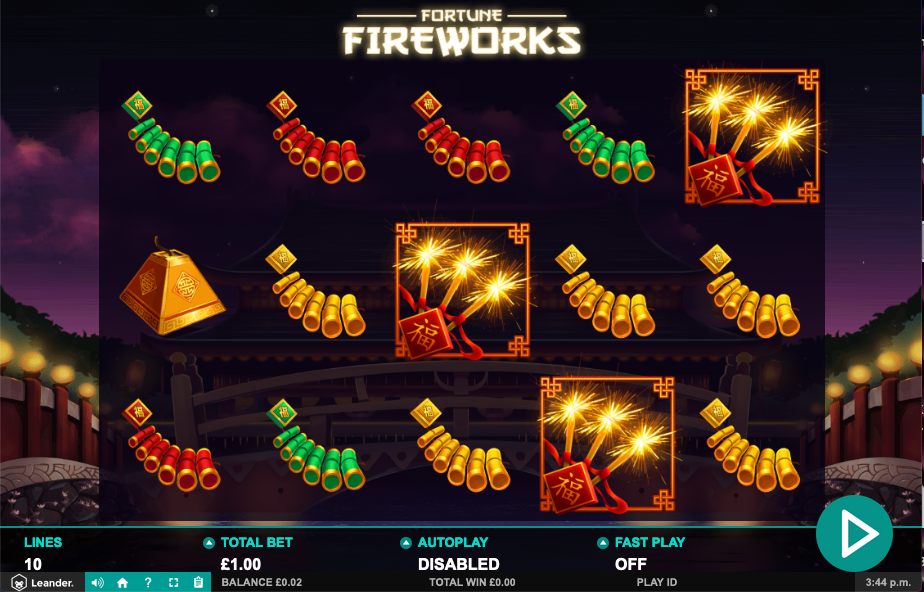 Fireworks exploding in the air and the crackle of firecrackers filling the evening tell us that this is an online slot machine celebrating a significant event of some sort or another; it’s called Fortune Fireworks, it’s developed by Leander Games and it offers players exploding symbols and a wild feature.

Fortune Fireworks is a five reel slot with three rows and ten fixed paylines; a constant, colourful display high in the night sky accompanies the gameplay while at ground level a bridge across a river is just about visible behind the transparent reels.

High value symbols include the double rocket, the catherine wheel, the pyramid firework and then firecrackers in red, green and yellow.

The dragon is wild and it will replace all standard symbols to help form winning combinations; the golden firecracker is the scatter symbol.

Also sometimes known as Cascading Wins, Exploding Wins sees any symbols in a winning combination disappear to be replaced by more falling in from above; new combos can then be formed and the process continues until there are no more wins.

Wild Blast symbols are formed by creating combos of at least three firework symbols in adjacent reels starting from reels one, two or three:

Blast symbol remain on the reels throughout the Exploding Wins.

When this has all finished any scatter symbols which have landed adjacent to a Blast symbols will explode, leaving wild symbols in the pattern around the symbol shown below. A wild landing on another Blast symbol it will also explode and if a wild lands on another wild a win multiplier will be applied.

The feature in Fortune Fireworks may seem ever-so-slightly complicated but it isn’t really and soon becomes clear after a few spins; it’s a slot with plenty of oriental charm and no little chance to grab some big wins.