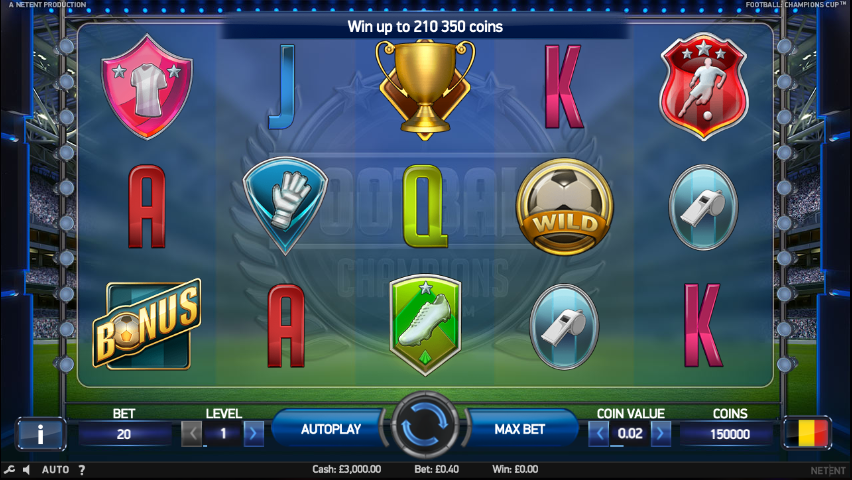 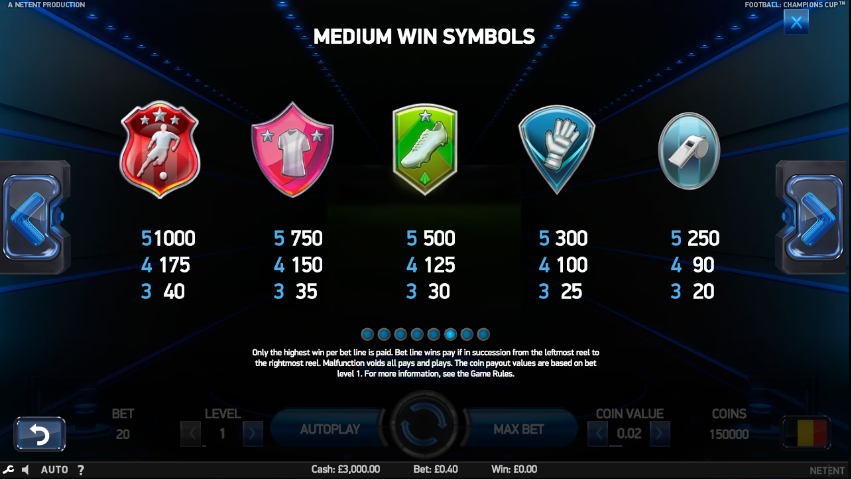 Brand new from Net Entertainment is this footie-themed online slot which has arrived just in time for this summer’s European Championships in France. It’s called Football: Champions Cup and it’s a crisp-looking game with several bonus features to enjoy and some authentic crowd sounds.

Football: Champions Cup is a five reel slot with three rows and twenty fixed paylines; it takes place against a backdrop of a football stadium which is just about visible either side of the opaque reels. The design is simple but attractive with typical Net Ent quality.

There are five theme-related base game symbols and they comprise a red badge, a pink badge, a football boot, a goalie’s glove and a referee’s whistle; 10, J, Q, K and A make up the lower values.

The wild symbol is a football within a gold frame and it will substitute for all others except the two scatters – a gold trophy and a ‘bonus’ icon.

This is triggered by landing three of the gold trophy scatter symbols anywhere in view on reels two, three and four; you begin with six spins initially and must work your way through the round of 16, quarters, semis and then the final. A match is won by landing more red wilds than your computer lands blue wilds and then you progress to the next round with six more free spins.

If you win the final you will win a 500x bet multiplier; second and third places win 100x and 20x respectively.

Trigger this by landing three or more of the bonus symbols anywhere in view and you will now get to play a penalty shootout game against a computer opponent. You will have five chances to score a goal by selecting a spot at which to shoot for a cash prize and then you must pick a spot to try and save a penalty – this awards a prize multiplier.

The winner is the player who scored most goals during this round and it can go to sudden death if necessary; more triggering symbols mean higher prize multipliers for your your cash wins.

This occurs randomly in the base game and between two and five extra wilds will be placed on the reels to help out in the search for winning combos.

Football: Champions Cup is a high quality slot which should appeal to footie fans with it’s well-designed features and classy graphics. It comes with an RTP of 96.82%.