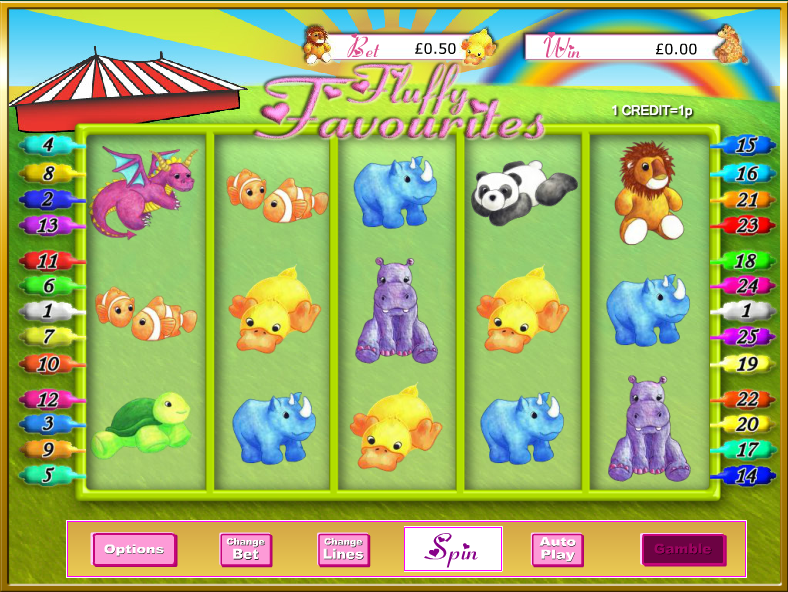 We’ve reviewed plenty of animal-themed online slots in the past but this one is a little different; rather than real animals it’s all about soft toys – those stuffed creatures beloved of small children and adults who are probably old enough to know better. It’s called Fluffy Favourites, it’s developed by Eyecon and it features several bonus features.

Fluffy Favourites is a five reel slot with three rows and up to twenty five paylines; the graphics are admittedly pretty basic and reminiscent of a children’s television show from the 1970s. Everything’s very green except the big circus tent, the sun and the rainbow in the background.

The main symbols are all stuffed animals and include a hippo, a dragon, a monkey, a panda, a lion, a turtle, a giraffe, a rhinoceros, a duck and a pair of goldfish. The first four in that list will payout for just two on an active payline.

The pink elephant is the wild symbol and a scatter; there’s also another scatter which is one of the claws you see in those arcade games where you try to grab prizes (usually unsuccessfully).

This game is triggered by landing three or more of the claw grabber scatter symbols anywhere in view; you will now get to make the same number of prize picks as the symbols you’ve collected so a maximum of five picks is possible. Each prize will be worth a maximum of 100x the total wager.

The spins are triggered by landing the following number of pink elephants anywhere on the reels:

All wins during this round will be tripled and it’s possible to re-trigger more spins by landing more elephants.

Any win can be gambled by using the ‘Gamble’ button below the reels and you will play a double or nothing game. You can take your win at any time but a wrong answer will lose it all – the maximum win is 3,200,000 coins.

Despite it’s graphical simplicity, Fluffy Favourites is a strangely addictive slot which has kept our attention longer than we thought it would. It’s reasonably easy to trigger the bonus features and who doesn’t like fluffy animals? Check it out.