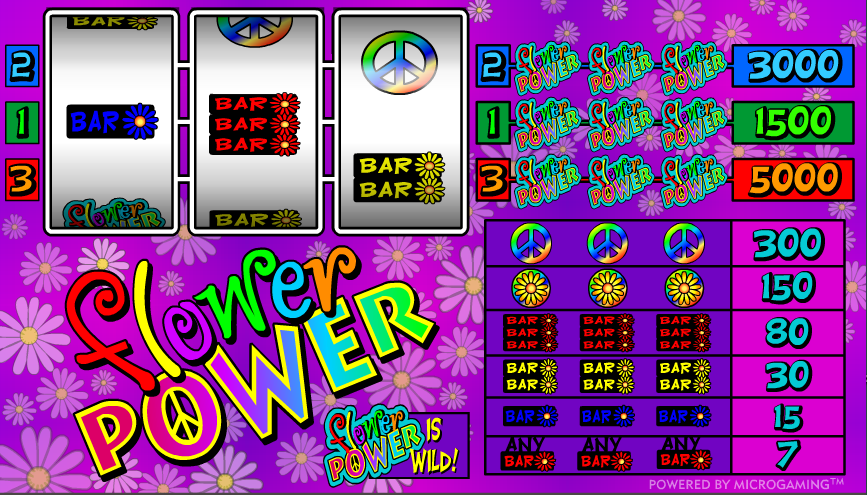 The 1960s and the early 1970s were a time of peace and love – at least for those consuming all the drugs available at the time. Flower Power was the name given to the resistance movement which originally protested non-violently against the Vietnam War and it later became inextricably linked with the hippy movement. For our purposes though it’s the title of an online slot from Microgaming which steals the Flower Power theme for it’s own.

Flower Power plays out over three reels and three paylines and there’s certainly a hippy vibe to this game; the purple background is dotted with floating daisies and the big logo underneath the reels is psychedelic in colour and even includes the CND logo in the ‘O’ of Power.

The symbols include single/double/triple bars adorned with flowers, a multicoloured flower on a gold background, a multicoloured CND logo and a Flower Power icon. That last symbol is also wild and will substitute for any other to make a winning combination. It’s also the most valuable and worth 5000x your one stake for five on an active payline.

The symbols are all designed in a a very attractive way and fit the theme appropriately.

It’s worth noting that the highest prize of 5000x is only available on payline three and to activate that line you will have to have all other lines active too. This means if you’re holding out hope for the big bucks then the minimum stake becomes £0.75 with all three lines active.

Flower Power is similar in design to many Microgaming slots from the same period but it certainly looks good and the design suits the theme well. It’s better than average.