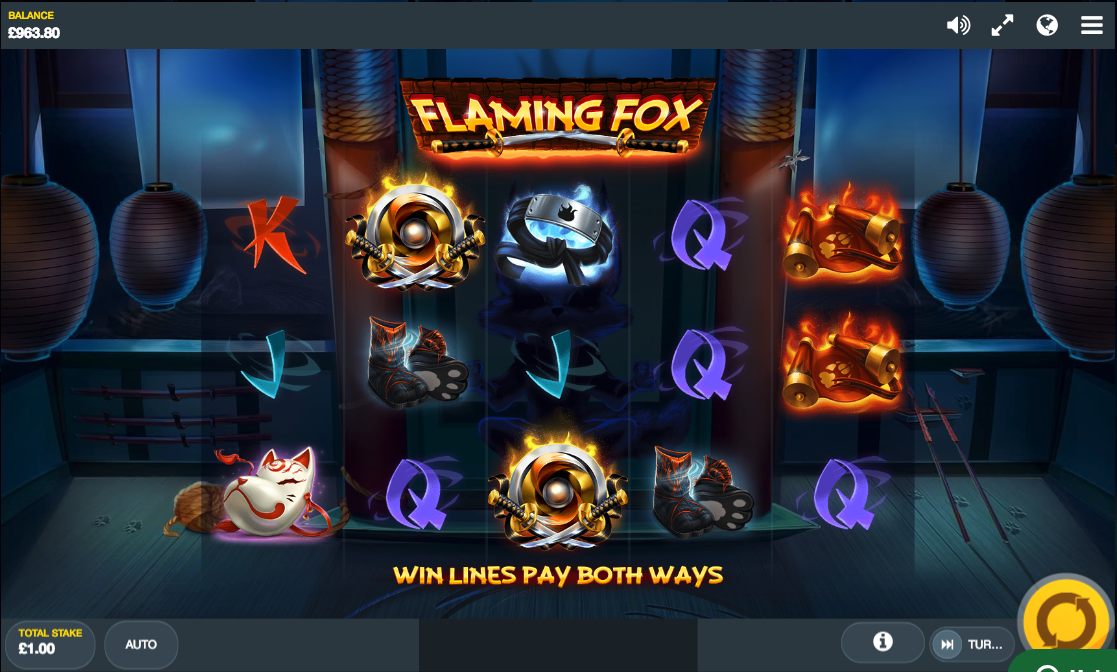 Animals performing martial arts is a theme which never fails to entertain so we’re pleased to bring you Flaming Fox, an online slot machine from Red Tiger Gaming with plenty of features, a brooding atmosphere and paylines which win both ways – read all about it below.

Flaming Fox is a five reel slot with three rows and ten fixed paylines (although wins can be formed from right to left as well as left to right); the reel spinning action takes place in a dark studio unlit by the paper lanterns hanging from the ceiling. Peer closely and you’ll see the fox levitating behind the reels.

The high value symbols include some flaming swords, a fiery scroll, a glowing headband and a pair of boots; 10, J, Q, K and A make up the lower values.

The wild is a big ‘Wild’ which will replace all others to help form winning combinations except for the fox free spins scatter symbol.

The fox may randomly spring into action and replace symbol positions or entire reels with a flaming one – this will only contain high value or wild symbols, potentially helping out with some bigger wins. The fox may then repeat this to create locked wilds.

This is triggered by landing three or more of the fox scatter symbols anywhere in view for which you will receive a random number of free spins – more scatters mean more spins though. The Flaming Features are also active here and will remain locked in place until the round ends; there’s an Extra Spins spins symbol in the Flaming Features which will award more spins.

There’s a touch of quality and class about Flaming Fox which sets it above most slots and it’s the combination of great graphics, a decent soundtrack and some clever bonus features which make it a winner. It comes with an RTP of 95.06%.