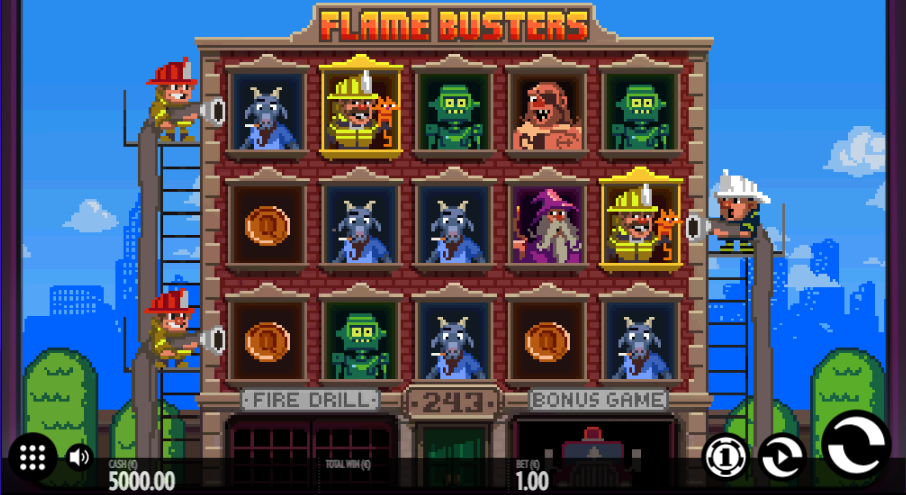 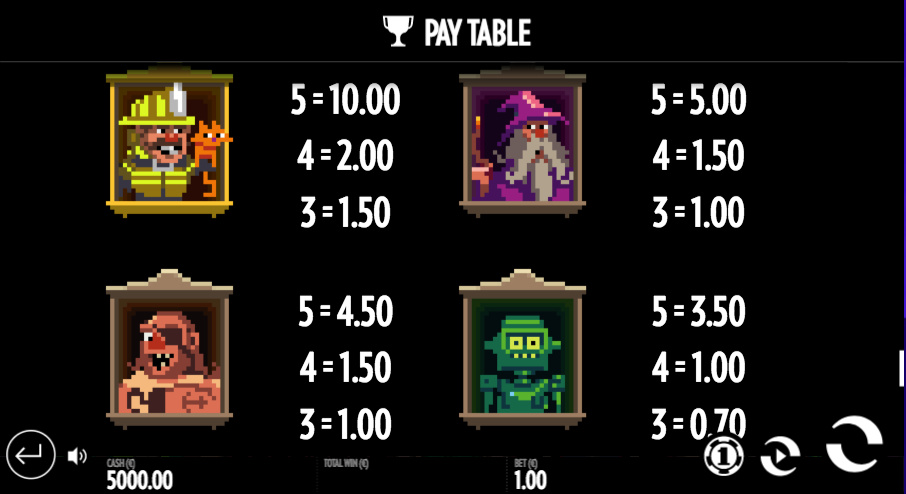 Those of us who are old enough will remember the type of pixellated computer games we used to play back in the 1980s and this online slot from Thunderkick is a tribute to those early days of arcade pleasure; it’s called Flame Busters, it includes some clever features and you can find out how it all works below.

Flame Busters is a five reel slot with three rows and 243 ways to win – wins can be formed as long as there are matching symbols in adjacent reels starting from the left hand side. All the action takes place on the side of a blocky building with firefighters poised on either side (they’re part of a feature).

The higher value symbols look like various unnamed characters from other retro arcade games and there’s a fireman, a wizard, a pirate, a robot and an alien; four coins marked with T, J, Q, K and A represent the lower values.

The wild symbol is a bit orange ‘W’ and it will replace all others to form winning combos except for the Alarm Bell scatter icon.

This is triggered by landing three, four or five of the Alarm Bell scatter symbols anywhere in view for which you will receive 10, 15 or 20 free spins respectively. The idea during this bonus is to collect more scatter symbols – each three gathered will unlock a new floor and award two extra spins. Each unlocked floor will turn the lowest value symbol into a fire symbol (explained below).

Each time the fire symbol lands it will be extinguished by the firefighter and all those on the reels will transform into matching symbols (except the scatter and wild), hopefully helping you out with a big win.

This occurs randomly only in the base game and you will see a small graphic showing one to five of the lower value icon changing into fire symbols which will then change into matching icons.

Flame Busters looks dated but superb at the same time and it’s a very authentic tribute to 1980s arcade games of a particular style; as a slot the gameplay is excellent, the features are clever and there’s an RTP of 96.10% – definitely check this one out.