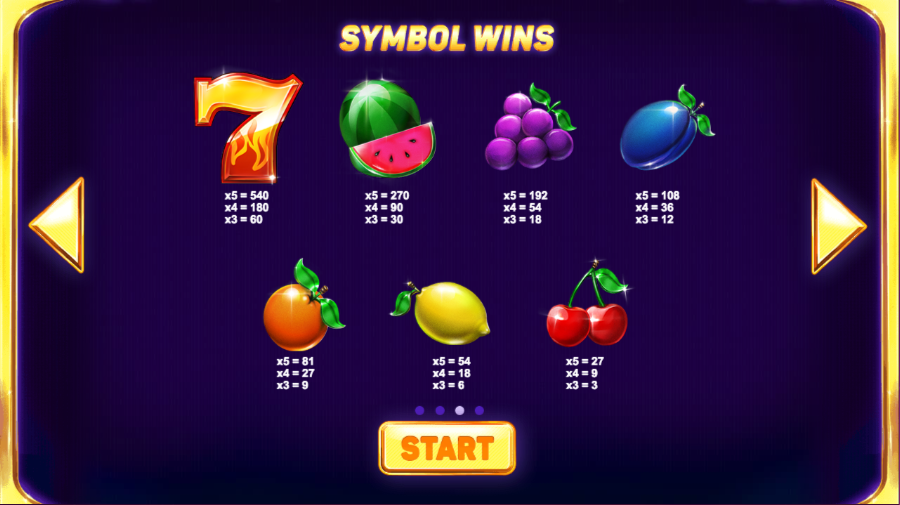 Fruit is the name of the game in this online slot from Red Tiger Gaming – it’s called Five Star and it’s glossy facade also hides a tasty progressive jackpot and a feature which can respin every win. Find out how it all works below.

Five Star is a five reel slot with three rows and just three paylines; those reels spin on the visible portion of a physical machine which is dark red in colour against a yellow backdrop. To the left are the jackpot totals slowly incrementing.

The symbols are all recognisably traditional and include flaming, golden sevens, watermelons, bunches of grapes, plums, oranges, lemons and cherries.

There are no wild symbols in this slot but there’s a Five Star bonus symbol and of course the Jackpot icon which activates the progressive prizes.

There may only be three paylines but each time you land a winning spin there’s a chance that it will repeat itself – the reels will shake for a bit before deciding whether or not to award the repeat.

The Five Star symbol is essentially a valuable scatter symbol worth 30x, 100x or 500x your stake for three, four or five anywhere in view respectively. There’s also a chance of a Repeat Spin for lucky players.

This is triggered from the base game by landing three of the jackpot symbols which will either award the Mega or Daily prizes shown to the left of the reels. There’s also a Daily Jackpot which must pay out before the time shown.

Five Star is a high quality slot with some nods to traditional games and a Repeat Spin feature which seems to trigger more regularly then you might think; the design will be familiar to those who’ve played other Red Tiger games but that’s no bad thing and there’s an RTP of 96.24%.