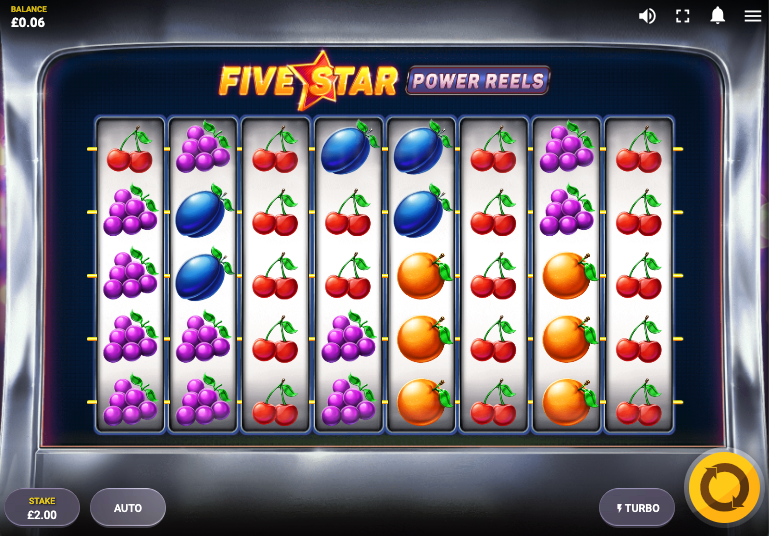 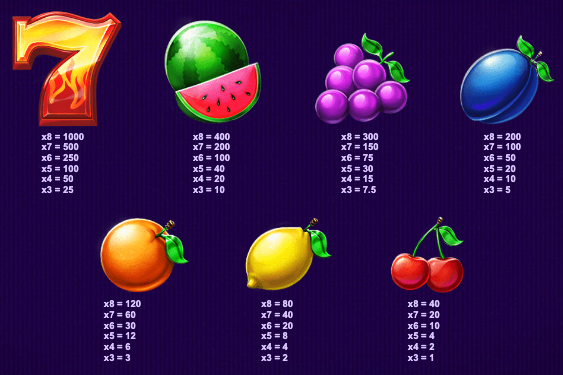 If five, six or even seven reels aren’t enough for you in the brave new world of online slot machines then how about a game with eight reels! Five Star Power Reels from Red Tiger Gaming has exactly that number and it also comes with a Repeat Spin feature and large scatter prizes.

Five Star Power Reels is an eight reel slot with five rows and just five paylines – not so many for such a huge reel set. The game is designed in chrome as a realistic-looking machine with rows of one-armed bandits stretching away into the gloomy casino room.

Aside from the fiery sevens, the symbols are all of the fruity variety and include watermelons, bunches of grapes, plums, oranges, lemons and cherries. Wins can be formed from right to left as well as from left to right.

There’s no wild symbol in Five Star Power Reels but there is a Five Star scatter symbol which pays out the top prize of 1000x your stake for five anywhere in view.

This slot is a little short on bonus features but fear not because it comes with the Repeat Spin which occurs regularly during your gameplay; every win has a chance of repeating itself and you’ll see this happening as the screen starts to shake. It’s also possible for the repeat to continue until you’ve won a maximum of 10x the initial win. Scatter wins can also repeat for the biggest payouts.

Despite a relative lack of bonus features Five Star power Reels is an action-packed slot and this is down to the huge number of symbols on the move at any one time; it’s fruit, fun and for the players!