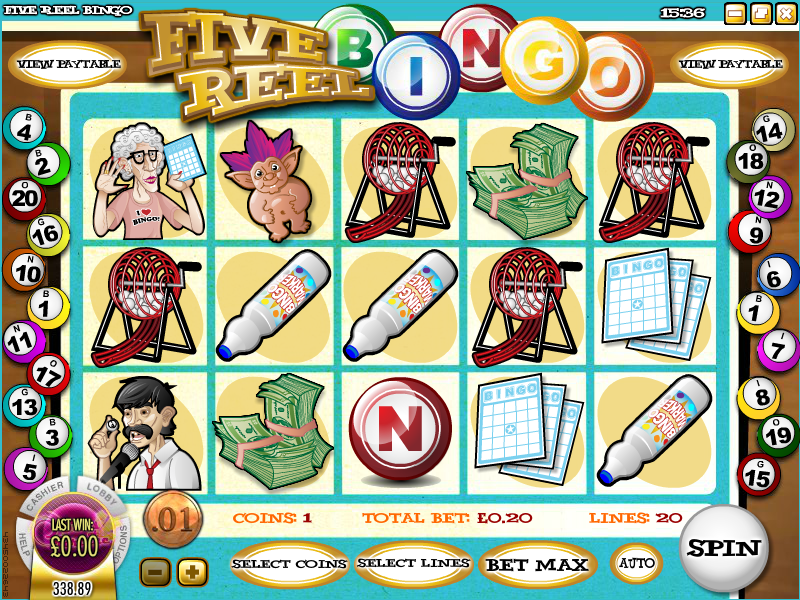 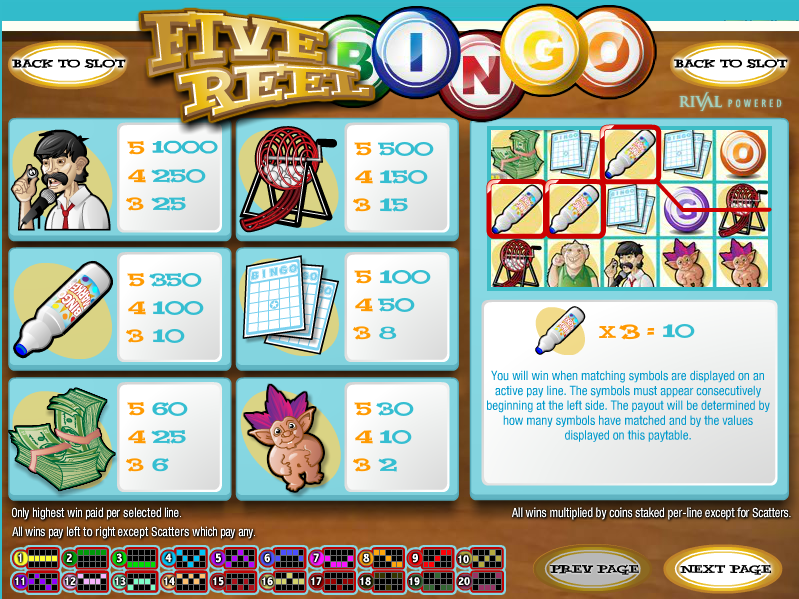 We review lots of online slots and we review the occasional piece of bingo-themed software but our task is made a little easier here because this is a slot with a Bingo theme. It’s from Rival Gaming, it’s called Five Reel Bingo and as you might expect, a game of Bingo is incorporated into the proceedings. Keep reading for more information.

Five Reel Bingo is a five reel and twenty payline offering with the famous game of Bingo as it’s heart. Bingo is a pastime similar to keno in which the aim is to cross off all the numbers on your card before anyone else.

The main symbols here are a pile of cash, Bingo cards, a marker pen, the ball cage, the caller, an old lady with a winning card and (for some reason) a little troll doll.

The letters ‘B’, ‘I’, ‘N’, ‘G’ and ‘O’ appear on reels one to five as bonus symbols, the wild is a ball marked with a star and the scatter is an elderly man.

There are a number of free spins here and to trigger them you will need to land three or more of the old man scatter symbols anywhere in view. You will be awarded the following:

Any wins during this feature will be multiplied by 3x and it’s also possible to re-trigger the spins by landing three more old men.

The main feature here is triggered by landing all five of the letters of the word BINGO on reels one to five. You will now get to play a round of the game but it’s all automated.

As you can see from the video above, a Bingo card will appear along with the ball grid and, in the top left hand corner, the patters you need to create to win prizes. The numbers are drawn automatically and wins are guaranteed. The more patterns you match, the more you win.

It can be slightly tricky to trigger the Bingo bonus game but you’ll get there eventually with perseverance. That’s really the main draw of this slot so it’s quite important. If you don’t have the stamina to reach that feature, this game might not be right for you. The RTP is a pretty disappointing 92.11%.