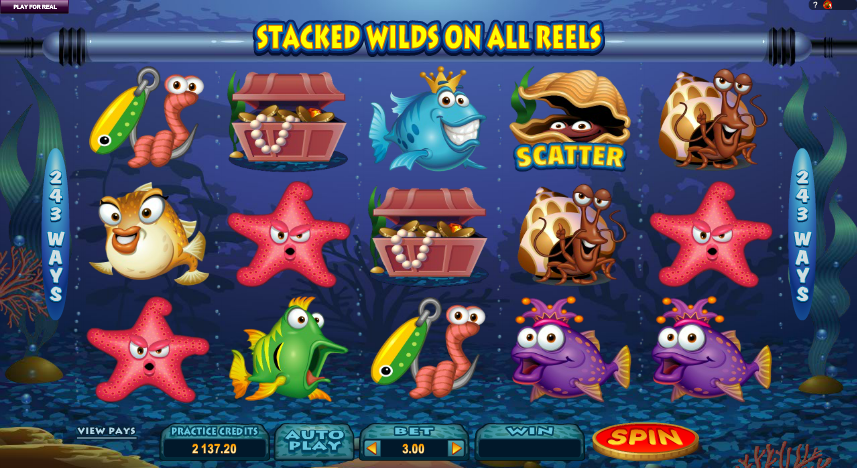 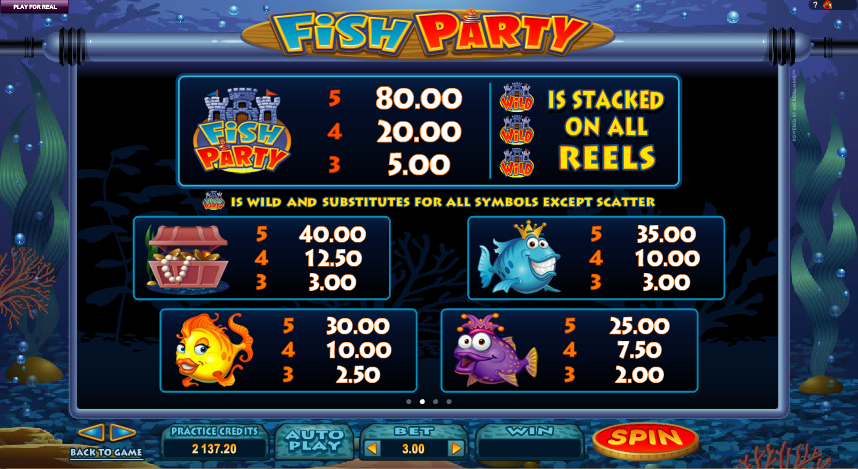 Fish Party is a brand new online slot from Microgaming which joins a long list of aquatically-themed games from a variety of developers. The quality of these games has been admittedly variable but we are always hopeful when checking out the next one – read on to find out more about this underwater adventure.

Fish Party is a five reel slot with 243 ways to win which means that the standard payline structure is dispensed with in favour of a system in which lets you make winning combos as long as matching symbols are in adjacent reels starting from the left hand side.

The action all takes place on the ocean floor and most of the symbols are cheerful aquatic creatures such as crabs, starfish, worms and various colourful tropical fish. The most valuable symbol is a treasure chest.

Special symbols are the Fish Party logo which is wild and then the clam scatter which activates the main feature. The wild is stacked in both the base game and the feature.

Landing three, four or five of the clam scatter symbols anywhere on the reels will kick off the free spins round. You will receive a random number of spins between eight and twenty but that’s not all – during this feature three of the tropical fish and the treasure chest will be stacked which, along with the stacked wild, means you should be able to land some lucrative winning combos. ‘Stacked’ means that the symbols can appear on top of each other on the reels.

The spins can be re-triggered by landing three or more clams during the spins.

After each win you have the opportunity to gamble that amount; just click the ‘Gamble’ button which appears below the reels and then try your luck at predicting whether the next card drawn will be the correct colour or suit. You can double or quadruple your cash this way but a wrong answer will lose you everything.

Use the gamble feature with care – trying your luck on every win is the quick way to run out of money.

Fish Party comes across as quite basic compared to recent Microgaming releases such as Terminator 2 and Avalon 2 but that doesn’t mean it’s not enjoyable. It’s cute and cheerful and there are some big wins available if you get lucky with the stacked symbols.