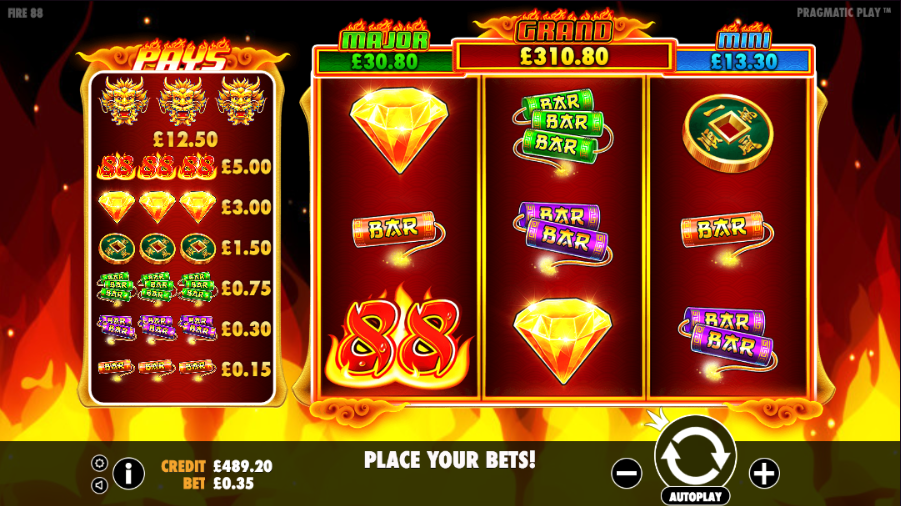 In another circumstance an explosive trip to the Orient might be a travellers tales of toilet emergencies in Asia but here it’s all about celebratory firecrackers and flames; this online slot from Pragmatic Play is called Fire 88 and it comes with two bonus features – read on to find out more.

Fire 88 is a three reel slot with three rows and seven fixed paylines; gold-rims surround those reels and also the jackpot prizes while the backdrop is a toasty vision of huge, searing flames. For your convenience the paytable is located on the left hand side.

The symbols are all related to the theme and include a flaming 88, a red hot diamond, a Chinese coin and single/double/triple firecrackers.

The golden dragon is wild and it will replace all others to help form winning combinations.

This is triggered whenever two wild dragons appear on the screen; any payouts will be made and then those wilds will freeze in place for one free spin.

As you spin the reels you will notice that a blue ‘Jackpot’ banner is occasionally added to the flaming 88 symbol; the jackpot bonus game is triggered if you can land three of these appended symbols anywhere in view at the same time.

You’ll now get to play a picking game in which you must select from the Chinese coins on show until you find three matching ones – this will determine which of the three jackpot prizes you’ll win – Grand, Major or Mini.

Fire 88 is a flaming trip through two interesting bonus features and some fast moving gameplay which culminates in some regular wins, especially when the Wiid Respins get involved. It’s an entertaining slot with an RTP of 96.46%.