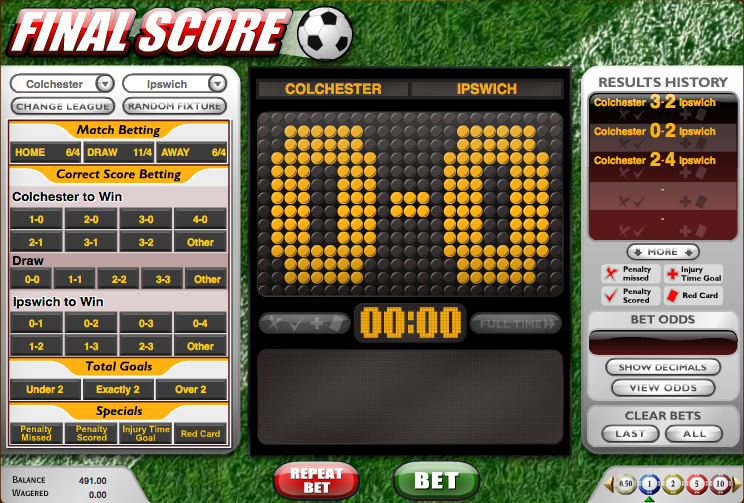 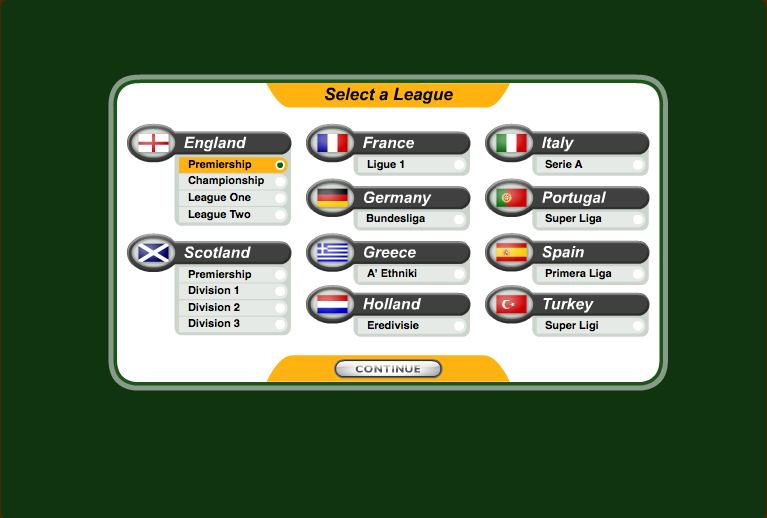 The phrase ‘Final Score’ occupies an almost iconic place for British football fans; it’s the title of the BBC broadcast which reveals the footie results on an early Saturday evening. To name a game after that show is a master stroke which can only help it’s popularity. It’s not a slot machine, it’s more of a chance to bet on individual games of your choosing.

Final Score has an element of the old Championship Manager games about it, at least in the look of the playing area. When you first load up the game you will be asked to choose one of several European leagues. Pick the English leagues and you will notice many familiar names listed and a couple of oddities – Manchester United and Manchester City are listed as Man Red and Man Blue while down in League One Burslem get a rare football league look in.

The first thing to do now is pick two teams to play each other from the league of your choice or you can select the ‘Random Fixture’. Underneath this is the where you place your chips and these bets will be familiar to anyone who likes the occasional sports bet. The more likely outcomes will attract the shortest odds and of course the reverse is true – choose a correct score for the longest odds.

You can bet on more than one outcome of course and there are also specials such as the chance of scoring in injury time or a red card being shown.

When you’ve finished selecting your bets just click on the big green ‘Bet’ button to start the match. It’s all over pretty quickly but it’s quite fun and this is the bit like Championship Manager. The clock counts up to 90+ minutes and you hope that your result comes in.

If you do manage a win you will then get a chance to play a bonus game where you can bet all your winnings on a penalty. Score and you can double your money but you’ll lose it all if it’s a miss.

On the right hand side of the screen you can see the most recent match results and it’s also possible here to change your bet format between decimal and traditional.

This is good stuff, not only can you play along with your favourite team, you can also experiment with different combinations of odds to give yourself the best chance of winning. Definitely worth checking out although RTP is a little low at 91.00%.