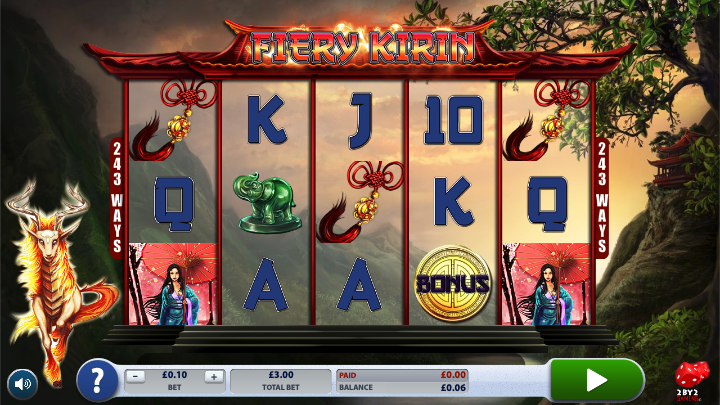 Many aspects of Chinese mythology have found themselves the subjects of online slot machines and now we can introduce the mystical Fiery Kirin into the conversation – it’s a legendary chimerical animal which is here to offer players multiple bonus features, expanding reels and free spin options – read all about this 2by2 Gaming slot below.

Fiery Kirin is a five reel slot with three rows and two hundred and forty three ways to win; the reels spin under a traditional red roof flanked by steep cliffs on which perch Chinese structures – the Kirin stands on the left hand side.

The theme-related symbols include the girl with the umbrella. the temple, the mountain, the jade elephant and the charm; 10, J, Q, K and A make up the lower values.

The fiery ‘Wild’ is wild and it will replace all standard symbols to help form winning combos; the scatter symbol is the one inscribed ‘Bonus’.

Landing a wild symbol on reel three will increase the height of reels two, three and four by one row and turn reel three completely wild – there are now 576 ways to win.

The following mini-features can be triggered after any spin:

This is triggered by landing three of the scatter symbols anywhere on reels two, three and four and you’ll be awarded one of the following free spins modes:

The free spins feature can’t be retriggered but when all three modes have been played you’ll be able to choose any subsequent ones.

Fiery Kirin blends Chinese myth with plenty of features and some high quality graphics to give us an interesting slots experience; there’s a dramatic musical accompaniment which only adds to the oriental charm of this game.