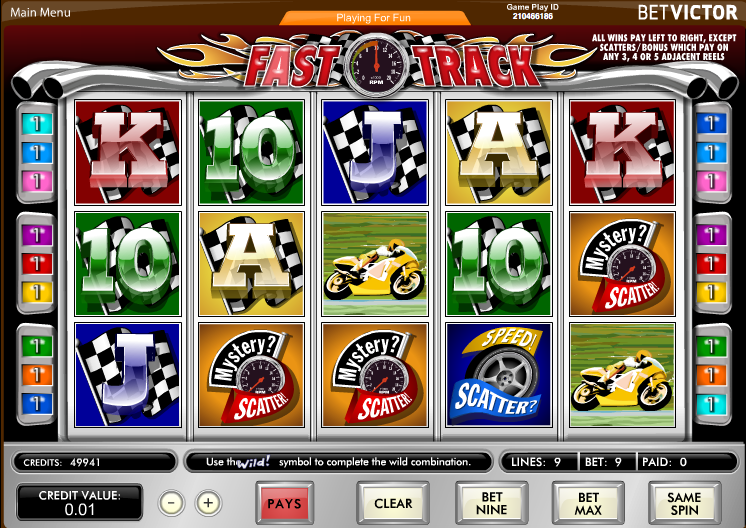 Screeching tyres and the noise of a Formula 1 car zipping past at 200mph must mean that we are at an autosport venue. Fast Track is an online slot machine from Amaya Gaming which joins a select bunch of games such as Racing For Pinks and Winning Wheels with motorsport as the focus.

Fast Track plays out over five reels and just nine paylines and the action on those reels takes place underneath the game’s logo which features a rev counter, chequered flags and red hot flames. The ancient sound is quite nice here and we are treated to the sort of trackside chatter which accompanies this type of event; landing a winning combo will mean the player gets to experience the sound of a super-charged car zooming past.

The low value symbol are 10, J, Q, K and A, all polished and placed against a chequered flag; a yellow motorbike and a red F1 car are the two higher value symbols but there’s also a blue touring car wild, a trophy bonus and then two different scatters labelled ‘Speed’ and ‘Mystery?’.

The trophy bonus symbols are the key to this mini-game and initially you will receive the following:

The feature will then start and you will be shown a screen displaying a number of race tracks. All you need to do is click them one by one to reveal individual multipliers until you hit ‘Collect’ at which point the round is over.

If you are lucky enough to hit ‘Collect’ on your first try, you will win all the multipliers.

The scatter symbols here are not what we would call scatters – they need to be landed in adjacent reels to win anything, as does the bonus trophy. This still means though that low rollers can play with minimum paylines and still have the same chance of triggering the feature.

This is a slightly dated game now but it looks attractive and plays pretty smoothly; the sound effects are probably the high point so if you’re looking for something more modern you may want to pass this by.