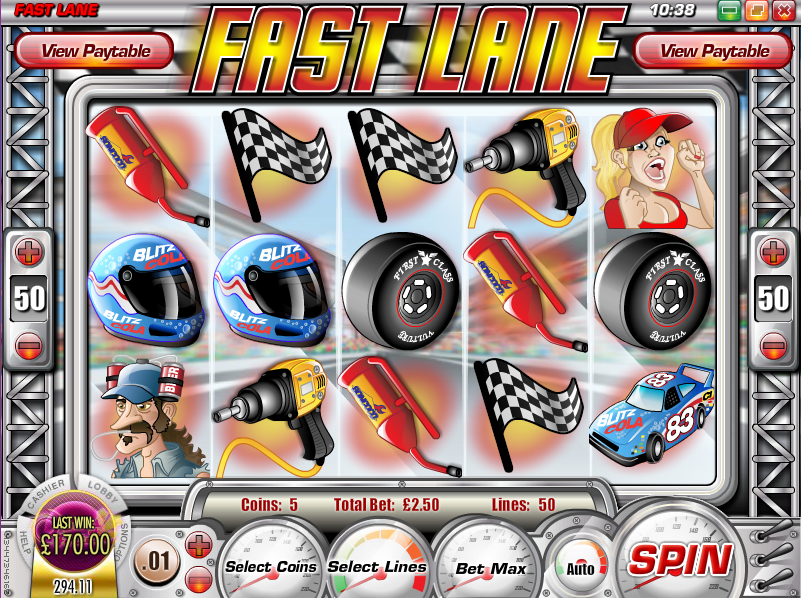 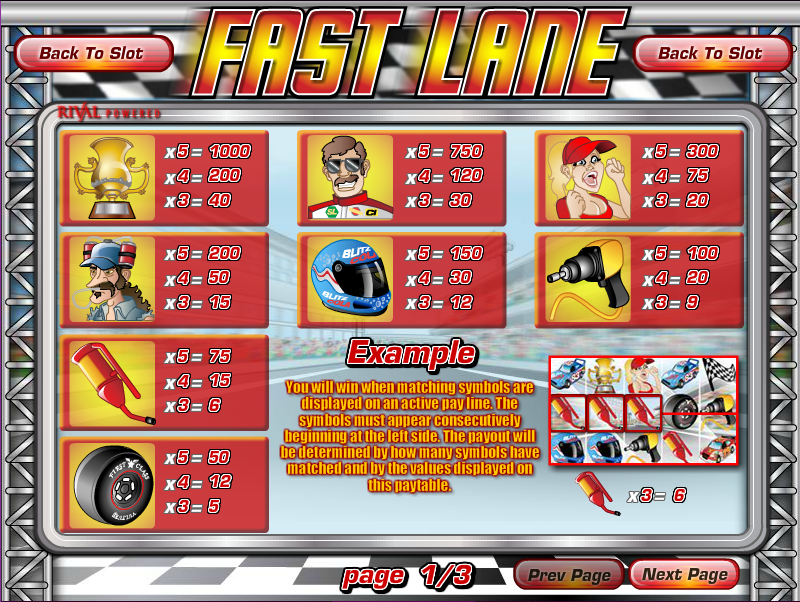 It’s time to don your helmet and take to the track as we check out this motorsport-themed online slot from Rival Gaming. It’s called Fast Lane and it’s an unashamedly American look at this high-octane activity. There’s no F1 sophistication here, just an appreciation of a day out at a NASCAR event so read on to find out more.

Fast Lane plays out over five reels and fifty paylines and those reels are framed by the starting gate; in the background there’s a blurry image of the racetrack.

The symbols include a spare tyre, an oil can, a rattle gun, a blue helmet, a racing fan, a cheering lady, a driver, a gold trophy and the red race car.

The wild is represented by the green race car and it will expand to fill all position on it’s reel if it can make a winning combination. There are two scatter symbols – a blue car and a chequered flag – which trigger their own bonus games.

The blue ‘Blitz Cola’ car is the key here and landing three or more of these scatter symbols anywhere in view will award the following:

Any wins during this round will be multiplied by 3x and the feature can be re-triggered by landing more blue cars.

This is the interactive bonus game and it’s triggered by landing three or more of the chequered flag symbols anywhere on the reels. You’ll see a short movie as the green car pulls into the pits and then you must follow the crew chiefs instructions as quickly as possible to perform the maintenance.

For example when you see a picture of the jack, click on the mechanic with the jack and likewise with the other tools. You can see this unfold in the video above and it seems to be quite a lucrative mini-game.

Speed is the key to the chequered flag game so get that mouse finger working quickly for a higher payout.

Fast Lane is good stuff and three’s plenty to keep players interested here. We especially like the way the reels turn into moving pistons as they spin and there’s lots of extra detail here. RTP is admittedly a little low at 93.19%.