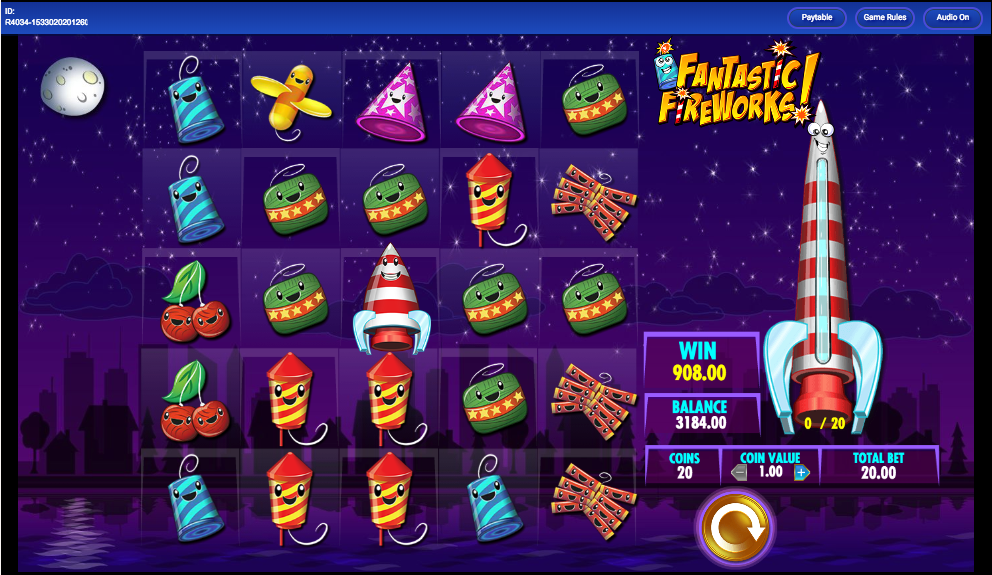 Fireworks are certainly a treat for most people but if you’d rather stay indoors on a chilly November evening and combine the colourful explosions with a chance to win some money then why not check out Fantastic Fireworks!, an online slot from IGT with plenty of bonus features.

Fantastic Fireworks! plays out on a 5×5 grid as you can see from the screenshot above and in line with the theme the symbols zoom in from the bottom rather than dropping from the top; behind those reels is a silhouette of an unnamed city under a clear, starry sky – there’s also a rocket on the right which we shall explain shortly.

All the symbols are of course various types of fireworks and the idea is to create vertical or horizontal matches of at least three – those symbols involved will then explode and create spaces form more fireworks to join the fun.

The thing that looks like a sun (right) is wild and it will substitute for all others to help form winning combos except for the rocket bonus symbol.

Special symbols are formed on the reels in the following manner:

These symbols stay on the reels and move around until they are triggered by being part of a matching combo or being hit by the effects of another special symbol:

The twenty segments on the rocket to the right of the reels are filled by landing symbols holding sparklers or instantly by landing a rocket bonus symbol; you’ll be awarded one of the following two bonuses:

Fantastic Fireworks! is an unusual and inventive slot with some rather basic graphics but enough bonus features to compensate; standard gameplay wins are small but the special symbols and especially the free spins offer the potential for some really big wins. The RTP varies between 93.25% and 96.51%.