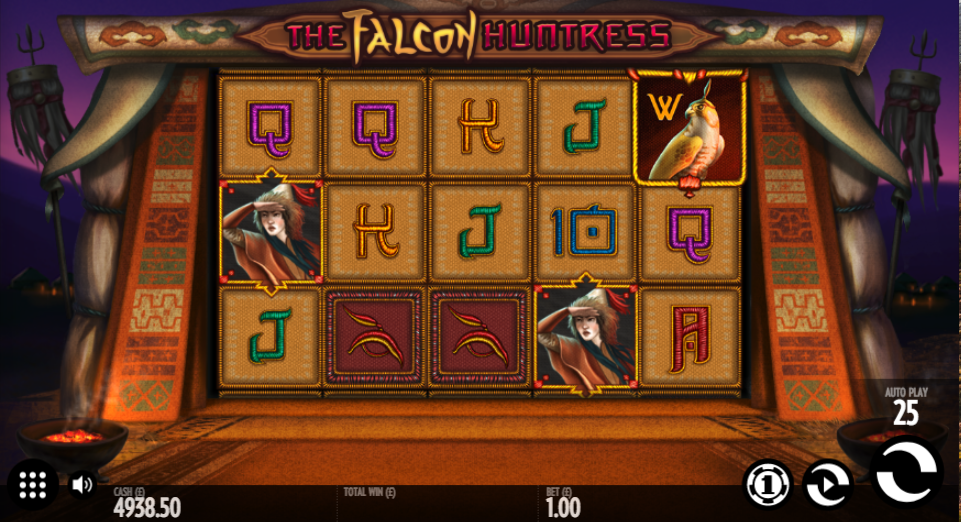 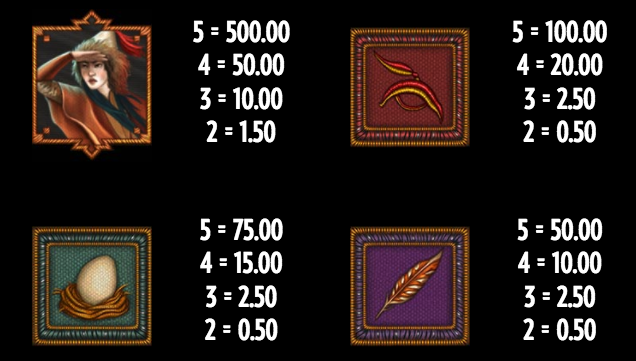 Let’s take a journey back to a time when the wild steppes of the orient were teeming with young women and their bird of prey companions; that’s the theme of The Falcon Huntress, an online slot from Thunderkick Games with two bonus features and a windswept atmosphere.

The Falcon Huntress is a five reel slot with three rows and nine fixed paylines; those reels spin on the entrance to what could be a Mongolian yurt complete with decorations, flags and a view of the sun setting over the Altai mountains.

The high value symbols include the huntress, a large egg in a nest, a feather and some sort of object probably related to the care of a large falcon; 10, J, Q, K and A make up the lower values.

The falcon is of course the wild symbol but it’s also the scatter – it will substitute for all others to form winning combos and it’s also the key to activating the main feature.

This is triggered by landing three or more of the falcon wild/scatter symbols anywhere in view for which you will receive an initial ten free spins. Landing three more falcons during this round will reward you with another ten spins.

In our experience this can prove a better winner than the free spins round – it occurs only in the base game and can be triggered on any winning spin. All symbols involved in the win will expand to fill all positions on their respective reels and the payout will be evaluated again. This is especially valuable if you have a five of a kind win. Note though that the wild symbol won’t expand.

The Falcon Huntress is a slot with a really interesting and engaging atmosphere; the graphics are of a very high quality and it’s the expanding wins feature rather than the free spins which result in the bigger wins. This game has an RTP of 96.10%