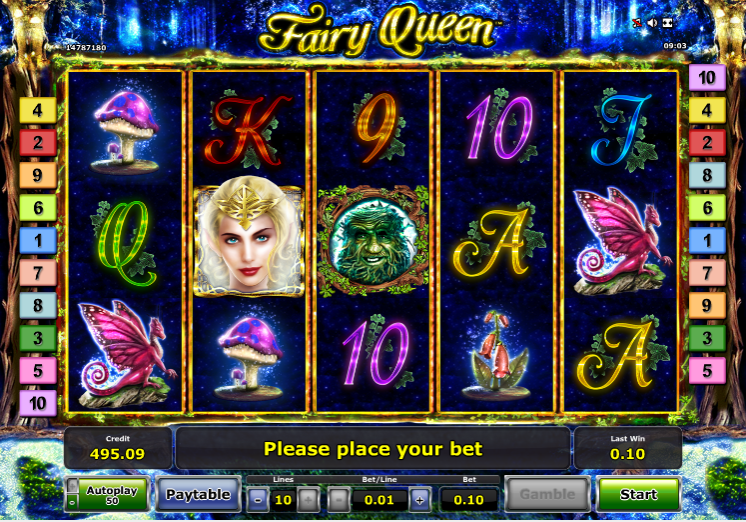 If the online slots industry is to be believed then there’s hardly a patch of forest which doesn’t contain some sort of magic and mystery. Fairy Queen is anther game which adds to that impression and it’s a sparkling affair with various legendary creatures appearing on the reels. It’s developed by Novomatic and you can read all the essential details below.

Fairy Queen is a five reel slot with three rows and up to ten paylines; this game glitters from every corner of the screen and above the gold-rimmed reels the forest appears in a blue haze as if a million fireflies are partying like this is their last day alive, which it probably is.

The higher value symbols are a range of mystical creatures including a green tree monster, a cheerful elf, a little pink dragon, a purple mushroom and a red flower.

The wild symbol is the Fairy Queen herself and she will substitute for all others except the scatter; that’s represented by a glowing forest view and it’s the key to the main feature.

This is triggered by landing three of the glowing scatter symbols anywhere in view and for that you will receive 10 free spins. That may not seem like an overly generous number but on every spin one of the symbol will be selected; that symbol will expand to fill all positions on it’s reel and it provides a guaranteed win on each spin.

Each base game win can be gambled by clicking the ‘Gamble’ button below the reels; you now try and double your money by playing a simple game in which you just have to guess whether the next card drawn will be red or black. Wins can be gambled up to five times but a wrong guess will lose everything.

Fairy Queen is quite an atmospheric game with some sparkly graphics and appropriate sound effects; we found it a little tricky to trigger the free spins but don’t let that out you off – it’s good fun and comes with an RTP of 95.09%.