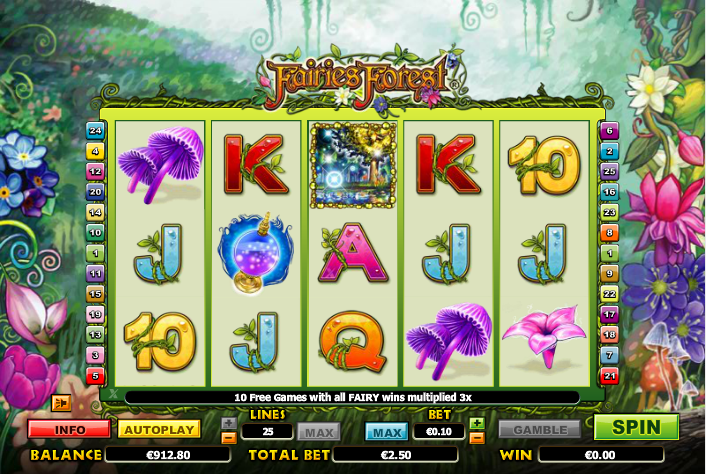 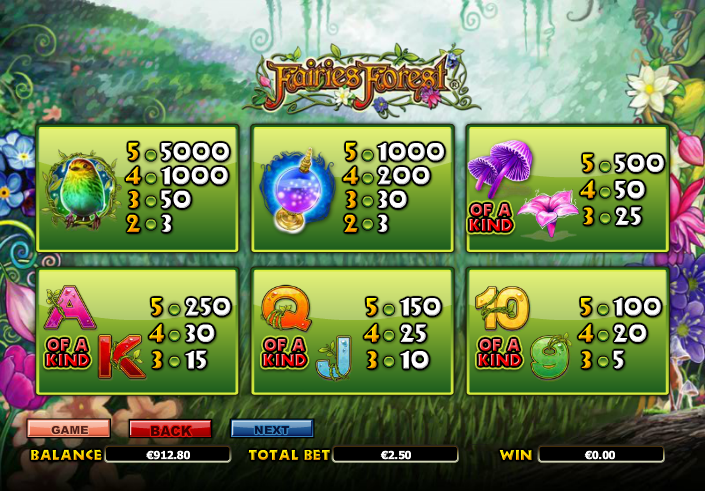 We’re taking a trip down to the woods today but this is not just any old clump of trees; Fairies Forest is an online slot from NextGen Gaming which takes place in an enchanted forest, the location of more than a few games we’ve played in the past. Perhaps it’s not exactly the same forest but it looks like a pleasant place to spend an afternoon – anyway read on for more information.

Fairies Forest is a five reel slot with three rows and up to twenty five paylines; brightly-coloured flowers frame the reels while the view beyond is a Van Gogh-esque landscape stretching into the distance.

The four high value symbols include mystical items such as a pink flower, purple mushrooms, some sort of crystal ball and a colourful bird. 9, 10, J, Q and A represent the lower values.

The green-haired fairy is the wild symbol and she appears only on reels two, three and four; additionally she can expand to fill all positions on that reel if a winning combination is possible. The scatter symbol is a sparkly view of the magic forest reflected in a lake.

This feature is triggered by landing three or more of the forest scatter symbols anywhere in view; you will now receive ten free spins and while there is no extra multiplier for your wins the expanded fairy is active here. During this feature, each time the fairy lands and expands any wins to which she contributes will be multiplied by 3x.

Additionally this feature can be re-triggered by landing three+ more scatter symbols.

If you’d like an extra gamble then just click that ‘Gamble’ button below the reels after a win. You will now get the chance to guess the colour or suit of the next card drawn in an effort to double or quadruple your win. You have a maximum of five correct guesses in a row but a wrong guess means you lose everything.

Steer clear of the gamble feature; it’s the surefire way to ruin you day (and deplete your bankroll).

Fairies Forest is a playable-enough game with a nice atmosphere and sound effects. It perhaps lacks a little bit of creativity and excitement but it’s worth a pop.